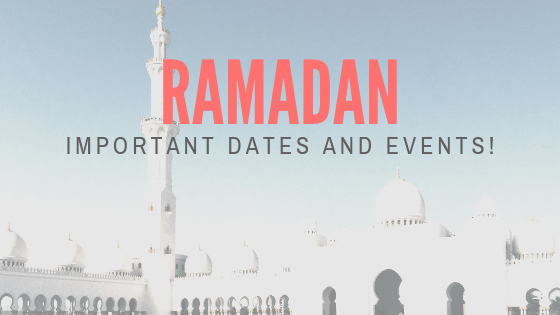 Ramadan is the 9th month of the Islamic calendar, it was the month when the Quran was completely revealed to the Prophet Muhammad PBUH.

Fasting in this month is among the five pillars of Islam. Fasting starts from sunrise to sunset. According to the teachings of Islam, it was the month when Quran was sent down to the lowest heaven, for revelation by Jibraeel AS to Prophet Muhammad PBUH.

Prophet Muhammad PBUH told all Muslims that Ramadan is the month when the gates of Jannah are being opened and the gates of hell are closed. This month ends with a celebration of 3 days of Eid Al Fitr.

Just like every Islamic month we have discussed in our blog posts, Ramadan also has a lot of important events that took place in this month, which is very important for every Muslim to know about.

Important Dates and Events of Ramadan

What is Laylat Al-Qadar?

Laylat Al-Qadar is being observed during the last ten days of Ramadan (Especially the odd nights). Laylay al qadar means the night of power, which is better than the nights of a thousand months. Muslims pray in odd nights to seek Allah’s mercy and forgiveness.