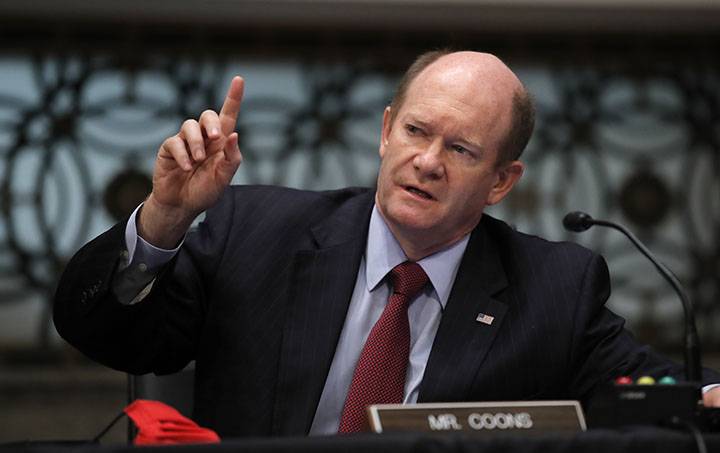 WASHINGTON, DC - JUNE 11: U.S. Sen. Chris Coons (D-DE) speaks at a hearing of the Judiciary Committee considering authorization for subpoenas relating to the Crossfire Hurricane investigation on June 11, 2020 in Washington, DC. Crossfire Hurricane was the code name for the FBI counterintelligence investigation that looked into links between Trump associates and Russian officials in the 2016 presidential election. (Photo by Carolyn Kaster-Pool/Getty Images)

It is told by senator Chris coons and 14 other US Senators to the social media, that steps are not being taken by  Facebook against hate speeches and the Muslims being targeted by the violence.

Facebook is being called out by the Democratic senators to reduce the spread of anti-muslim bigotry after social media failed to recognize address attacks and was criticized due to the attacks on several faith groups on many occasions including the shootings in Christchurch.

On Monday, a letter was sent to the CEO of Facebook Mark Zuckerberg by a group of 15 senators stating that he should carry out its community standard to point out anti-muslim hate and put a ban on the event pages which are used for harassment, organizing, and violence on the Muslim community.

The letter further stated that the ‘’call to arms’’ policy is not carried out properly by Facebook.

It is a year old rule which was made under the pressure of Muslim protecting groups. Since 2015 it has pointed out many cases where the Facebook organizers had advocated the followers to bring weapons inside the places of worship.

The platform has been used for the Imprisonment of the Uyghurs in China and other human rights violations against this population as indicated by the reports. Facebook and WhatsApp have stimulated the violence against Muslims in India and violence has been promoted b Facebook all around the world.

In New Zealand, the gunman who killed 51 Muslims during worshiping in the mosque has done this mass shooting live on Facebook for 17 minutes before the platform stopped it by itself.