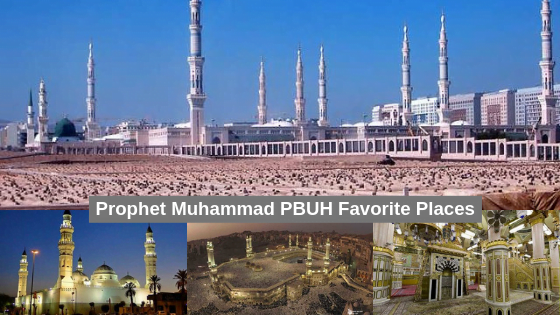 It is further stated that Prophet Muhammad PBUH said that a single Salah offered in Masjid Al Haram is equal to offering salah 100,000 times in any other mosque. Learn more about the Facts about the Holy Kaaba.

Prophet Muhammad PBUH also prayed to Allah SWT that make Muslims love Madinah as much as they love Makkah.

It is also reported that whenever Prophet Muhammad PBUH would travel towards Madinah and would spot the outskirts of Madinah from a distance, he would get so excited that he would race his camel towards the city.

The night of Israa and Miraj in which Prophet Muhammad PBUH from Masjid Al-Haram to Masjid Al Aqsa.

This incident has been mentioned in the Holy Quran (17,1) when Prophet Muhammad PBUH reached the Al Aqsa Mosque he leads a Salah there. All the Prophets of Islam offered the Salah under his leadership.

Prophet Muhammad PBUH, as well as Allah SWT, loved this place as they assured that a single salah offered here has multiple rewards, learn more about Masjid e Quba.

Mount Uhud is the place where the Battle of Uhud took place and it is the place (Mount Uhud) where Prophet Muhammad PBUH once stood and claimed that the mountain (mount Uhud) loves us and we must love it back.

Jannat ul Baqee is a famous graveyard right next to Masjid An Nabawi. About 10,000 companions of Prophet Muhammad PBUH have been buried here.

Prophet Muhammad PBUH used to visit this place very often and would pray for the forgiveness for the people buried there.

Prophet Muhammad PBUH has subliminally mentioned that this place (Al Rawdah) by stating that a Garden of Jannah is located between his house and the pulpit. At the eastern part of Riyaz al Jannah, the house of Aisha (RA) is located.

So, which of these Prophet Muhammad PBUH’s most loved places have you visited? If not, then when are you going to visit them? Let us know in the comments.