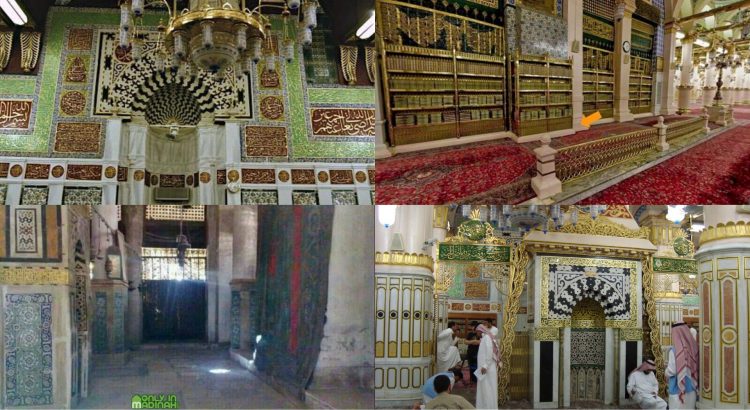 According to historians, the history of Mihrab starts in 888 AH under the leadership of Sultan Qaytbain. Then King Fahad bin Abdul Aziz realize the Mihrab began to lose their original shape and beauty, so he renovated the arches in 1404 AH.

First, Mihrab Nabawi (محراب نبوي), is located in a place where Prophet Muhammad (PBUH) used to lead Salah. Even until now, the imam of Masjid Al Nabawi still leads Salah in the same place.

Second, Mihrab of Tahajjud (محراب تہجّد), is located on the northern side of the dorm. It represents the place where Prophet Muhammad (PBUH) used to say Tahajjud prayer.

The historians also added that this Mihrab also existed during 643 AH during Ibn-e-Najjar but got removed later. After selecting a piece of red rock to work on, the Ottoman leaders renovated it. The verse Tahajjud is also engraved on the Mihrab with gold.

Third, Mihrab of Fatima (محراب فاطمة). It is located inside the room of Prophet Muhammad (PBUH). This Mihrab was built during Mamluk Era, and it is pretty similar to the Prophet’s Mihrab.

Fourth, Mihrab-e Uthmani (محراب عثماني). This Mihrab was built on the walls facing the qibla of the mosque. It was first built by Al Waleed bin Abdul Malik and later renovated and given a new shape by Sultan Qaytbai in 888 AH.

Fifth, Mihrab Sulemani (محراب سليماني). It was built around the second half of the ninth century and is located on the third pillar west of the pulpit in Masjid-e Nabawi.

In 948 AH, this Mihrab was given the name Mihrab Suleimani when Sultan Suleiman Khan rebuilt and renewed it. He also placed the white and black flowered stone on it that still exists until now.