Saudi Arabia’s Ministry of Hajj and Umrah reported that Umrah booking services started after the end of the Hajj 2022 season.

Ministry stated that the Umrah registration service would be open to the public on Tuesday, 1st Muharram, or July 30, right after the Hajj season’s end.

Last month, the Ministry of Hajj and Umrah announced that it suspended the issuance of Umrah permits from 23 June or 24 Dhulqadah.

Ministrystry decided to limit Umrah services to only Hajj pilgrims to maintain health and facilitate the Hajj rituals of Hajj pilgrims, and reduce the density of the number of pilgrims at the holy mosque.

Ministrystry explained that the restrictions on Umrah for Hajj pilgrims will be carried out for 26 days until Tuesday 20 Dhul hijjah 1443 H.

Earlier, Ministry had announced the success of the planned grouping of pilgrims after 90 percent of them threw pebbles at Jamarat. On the second day of Tasyreeq on Monday, Hajj pilgrims reportedly left Mina for the Grand Mosque to perform the final Tawaf Al-Wida (farewell circumambulation) after performing the ritual stoning on the three pillars of the Jamarat, which symbolizes Satan.

Saudi authorities reopen the registration of the hajj pilgrimage in this year’s hajj season to all countries in the world by issuing one million permits for hajj pilgrims from within and outside the Kingdom after two years of restricting the annual pilgrimage to only a few Muslims living in the Kingdom due to the coronavirus pandemic.

In addition, the Saudi government has also banned the distribution of water from the Holy Zamzam Well in bottles rather than allowing worshipers to drink it straight from cups in mosques. 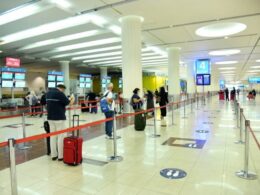