The Saudi Arabian government is now officially allowing foreign pilgrims to register for Umrah permits and access the Two Holy Mosques through a new service in the mobile application.

Last month, the Ministry of Home Affairs announced that the Kingdom had lifted coronavirus precautionary measures and allowed the Two Holy Mosques in Makkah and Madinah to host pilgrims at total capacity.

Although social distancing measures have been lifted, pilgrims are still required to wear masks and make reservations through the Tawakkalna app before performing Umrah and prayers to verify their immunity status at the entrances of the Two Holy Mosques.

According to Arab News, the Ministry of Hajj and Umrah, in cooperation with the Saudi Data and Artificial Intelligence Authority, has launched a new app service that allows overseas pilgrims to book their Umrah permits and visit both mosques.

The ministry emphasized that pilgrims who will apply for permits must first be registered on the Quddum platform. And before arriving in Saudi Arabia, travelers are also advised to download the Eatmarna and Tawakalna applications on their mobile phones.

After the Ministry of Home Affairs announced the easing of restrictions across the country, including those related to the Grand Mosque in Makkah and the Prophet’s Mosque in Madinah, the Grand Mosque on October 17 started to operate at full capacity, with worshipers praying hand in hand for the first time since the pandemic began in March 2020.

In August, Saudi Arabia announced that it would start accepting vaccinated foreigners wishing to perform Umrah.

Earlier in June, Saudi Arabia announced that only 60,000 pilgrims, who were only citizens and residents oKingdomingdom, were allowed to participate in a vastly scaled-down form of the Hajj.

Before the pandemic started, around 2.5 million Muslims worldwide used to visit Makkah and Madinah for the annual Hajj and Umrah pilgrimage, which usually generates a combined $12 billion annually foKingdomingdom. 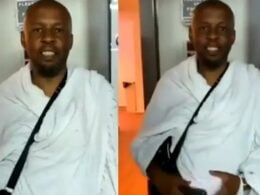