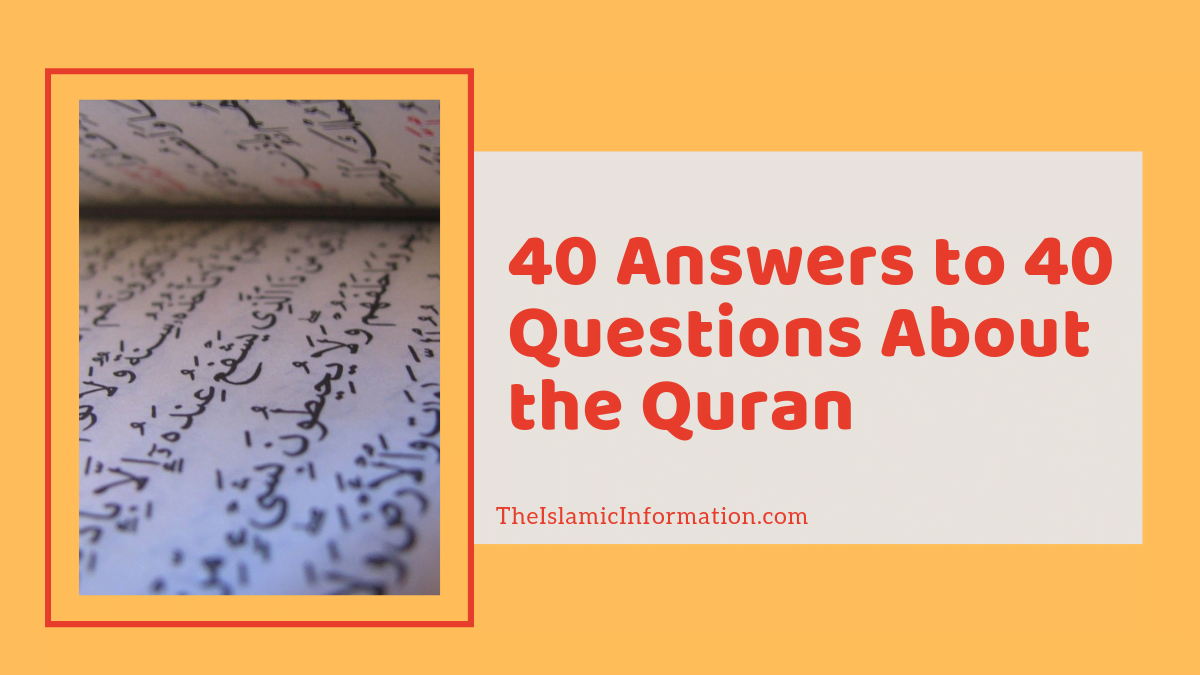 These 40 major Questions About the Holy Quran will help you get a solid grip on general knowledge about Quran. Share to help other people know about it too.

What do you know about the Qur’an? How closely are we acquainted with this scripture of God? When and under what circumstances was it sent out? What sections does the Qur’an consist of, and which of the creatures of the Lord is mentioned in it? Read the answers to these and other questions in our material.

1. Who sent down the Quran?

2. To whom was the Quran revealed?

To the Last Messenger of Allah, Prophet Muhammad PBUH.

3. Through whom was the revelation of the Quran sent?

Through the angel Jibril (AS).

4. What was the night when the Quran sent down to the lower heaven?

In the month of Ramadan on the night of Predestination (Lailat-ul-Qadr).

5. Where was the Quran first revealed by the angel Jibril to the Prophet Muhammad (PBUH)?

In the cave of Hira in the vicinity of Mecca.

6. How old was the Prophet Muhammad PBUH when the first revelation was sent to him?

7. How many years did Allah send the Quran?

8. For how long did the Prophet PBUH receive revelations in Makkah?

9. How many years have the Quranic surahs been sent to the Prophet PBUH in Madinah?

10. Which of the Companions of the Prophet PBUH recorded the divine revelation?

11. At whose command, the Quran was written?

At the command of Abu Bakr (may the Lord be pleased with him).

12. On whose advice did Abu Bakr (RA) decide to assemble the Quran as a whole?

On the advice of the companion of Umar (may the Lord be pleased with him).

13. How many associates participated in the creation of a single Mushaf of the Quran in the reign of Abu Bakr (RA)?

14. How many copies made by Usman (RA) have survived to this day?

Only 2 copies, one of which is stored in Tashkent, the other in Istanbul.

15. How many surahs there are in the Quran?

16. How many Surahs of the Quran were sent down in Makkah?

17. How many surahs of the Quran were sent down in Medinah?

18. What is the first surah of the Quran?

19. What is the last surah of the Quran?

20. What surah is called the “Heart of the Quran”?

21. Which Surah of the Quran is the longest?

22. What is the shortest surah of the Quran?

The Quran consists of 30 juz.

25. How many verses of the Quran, after reading of which you need to make an earthly bow (Sajda)?

26. What surah of the Qur’an does not begin with the Bismillah?

27. In what sura of the Quran does the Bismillah repeat twice?

29. How many names of Allah are mentioned in the Quran?

30. The names of which angels are mentioned in the Quran?

31. How many prophets are mentioned by name in the Quran?

32. Which prophets are mentioned in the Quran?

33. Which prophet’s name is mentioned most often in the Quran?

The name of the Prophet Musa (peace be upon him) is 136 times.

34. How many Surahs of the Quran are named after the names of the prophets?

35. What woman’s name is mentioned in the Quran?

The name of the mother of the Prophet Isa (peace be upon him) is Maryam.

36. What is the name of the Companion of the Prophet Muhammad PBUH mentioned in the Quran?

37. What are the other names of the Quran according to the Quran itself?

38. In what year did vowels appear in the Quran?

39. Under what conditions can you touch the Quran?

A person touching the Koran should be in a state of ritual ablution.

40. Who took responsibility for the preservation of the Quran?

Do you like this article? Please tell others about it, repost in social networks! and if you want to correct something in this article, please comment below.