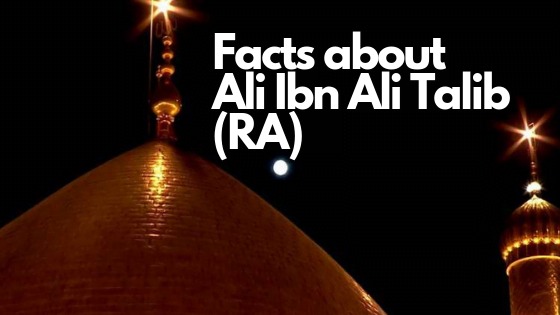 Ali Ibn Abi Talib (RA) was Muhammad (PBUH)’s a great companion, cousin, and Son in law. He gave his life for the cause of Islam and spreading the words of knowledge.

The book Nahjul Balagha – the peak of eloquence, this book is the collection of Addresses, sayings, and pieces of advice given by Ali (RA) on which Shia and Sunni labels as an authentic book. He was also the youngest person to accept Islam.

And his sayings still astonish the world even after passing over 1400 years!

The name of his sword was Zulfiqar which was given to him by Muhammad (PBUH) in the battle of Uhud. And it was presented by Angel Jibraeel after an order from Allah.

Ali (RA) as a Father and Husband

Muhammad said to Fatimah: “I have married you to the dearest of my family to me.”

He was the father of Hassan (RA) and Hussain (RA) who are the masters of youngsters in Jannah.

He was martyred by Kharjitte Abd-Al-Rahman Ibn Muljam on the 21 Ramadan 661 AD in the Great Mosque of Kufa during the Fajr prayers.