Full Story of Battle Of The Trench (Ghazwa Khandaq) – With Facts 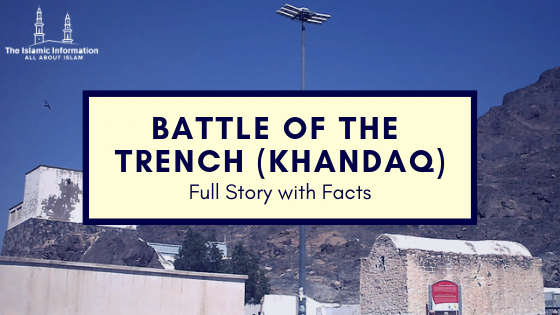 The battle of the Trench is also known as Ghazwa Khandaq, it was the 30-day long fight of Yathrib by Arabian and Jewish tribes.

The defenders of Medinah were Muslims led by Prophet Muhammad PBUH, he ordered a Trench to be dug after taking a suggestion from Salman Farsi (RA). These trenches gave Muslims the benefit of defeating enemy armies of suffering fewer casualties.

The commanders of Muslims in this battle were Prophet Muhammad PBUH, Ali Ibn Abi Talib (RA) and Salman Farsi (RA). And on the enemy’s side, the commanders were Abu Sufyan, Amr Ibn Abd Al Wud and Tulayha.

This story is also mentioned in the Holy Quran in the Surah Al Ahzaab. In the Quran, this battle was quoted to tell Muslims that whoever went against Islam would be defeated in every battle.

After a fight from Makkah, Muslims fought Quraysh at the Battle of Badr in 624, and after that in 625, Muslims fought Battle of Uhud, in which Muslims were never lost or won at the battle, but Muslims’ army was growing at a rapid scale.

The reason of starting the Battle of the Khandaq (Trench) was to protect Madinah from the attack that was led by Banu Qaynuqa and Nazir tribes who were in alliance with the Quraish tribe to attack as an act of revenge from expelling them from Medina during the invasion of Banu Nadir and Banu Qanquya.

A group of Jews, Sallam ibn Abi al-Huqayq and Huyayy ibn Akhtab, together with a number of Banu Wa’il, went to Quraish Tribe and told them they have Jews’ full support to attack Makkah and start a war against Prophet Muhammad PBUH.

The Jews group went to Ghatafan and Qays Aylan tribes and urged them to start a war against Prophet Muhammad PBUH and gave them the same support.

It took Muslims 6 whole days of hard work to dig it. Prophet Muhammad PBUH divided Muslims into groups of 10 and dug the trench alongside them. He also ate Dinner at Jabir RA’s house, whose miracle is also in Hadiths.

Due to this ditches dug by Muslims, the Muslims who were in fewer numbers were able to defeat the enemy forces, and the victory of this war had already predicted by Prophet Muhammad PBUH while he was digging the ditch, he said “This is Quraish’s last attempt to destroy Islam and Muslim, and from now on we will rule over them.”

The outcome of the Battle of the Trench

Muslim won this battle very easily, Although Muslims were just 3,000 and enemy forces were 10,000 yet Muslims only suffered 1 to 5 casualties while the opponents ended up losing 80% of their army.

After that Muslims further conquered Banu Qurayza neighborhoods and ruled over these tribes proudly as more people from these tribes accepted Islam and later Islam flourished in this region.

Facts about Battle of the Trench (Ghazwa Khandaq )