Bollywood Actor Shah Rukh Khan is under fire after visiting a Hindu Temple and releasing a vulgar Bollywood song days after he performed Umrah in Makkah, Saudi Arabia.

People on the internet have accused Shah Rukh Khan of using the Holy Place (Makkah) to gain popularity before releasing his movie. The Hollywood actor trended on the internet when he was first seen in Makkah.

But a few days later, he was seen dancing with girls in a bikini from the music video of his movie, which made him the center of attention for all wrong reasons.

He has recently visited a renewed Vaishno Devi temple in Jammu.

Muslims worldwide called Shah Rukh Khan a “confused Muslim” for not knowing the real meaning of the religion and its’ teachings.

Want to say something about it? Our comment section is open to you. 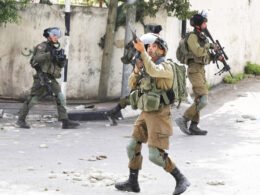 Three Palestinians were killed in an Israeli operation on Friday morning