KABUL, Afghanistan – Two blasts ripped through crowds seeking entry to the US-controlled facility Thursday, disrupting the final push of the evacuation effort as over 100 people were killed. Thirteen US service members and 90 Afghans were among those killed.

According to the Pentagon, one blast occurred near the airport’s entrance and one occurred near a hotel, with damages reported to include wounded US military personnel.

Adam Khan, an Afghan eyewitness, said an explosion ripped through a crowd as people waited to enter the airport. Many people were killed or injured, including some who were left with severe injuries or had their limbs severed.

An American suicide bomber outside Kabul airport killed 85 people, including US soldiers, including 13 who were helping evacuate Afghans fleeing Taliban rule on Friday.

The reason for the blast

One of Daesh’s suicide bombers targeted “translators and collaborators with the American army,” Deesh, an enemy both of the Taliban and of the West, said. US officials also blamed the group and promised retribution.

A reported suicide bomber exploded near Kabul airport on Thursday, killing nearly 85 people, some children, according to a Taliban spokesman, after the US and its allies warned Afghans to evacuate the area due to an Islamic State threat.

The Pentagon announced Thursday that a massive explosion happened outside Kabul airport, while the US-led airlift was still taking place within the facility.

“At this moment, the number of casualties is unknown. We will offer further information as soon as we are able “said John Kirby, a spokesperson.

As per a White House official, US President Joe Biden has been informed on the incident. According to a person familiar with the incident, Biden was in a meeting with security officials on the situation in Afghanistan, where the US is in the last stages of finishing its 20-year war when the explosion was initially reported.

The United States has been scrambling to fly its people and some Afghan civilians out of Kabul before its troops depart for good on August 31.

Children are also among the dead

There were few specifics on the incident as of yet, although Western countries have warned of a possible strike by Islamic State terrorists.

According to a US official, US servicemen were one of the injured, but he cautioned that this was only an early report and that it may change. He stated that there were fatalities but did not specify how many or of what ethnicity they were.

On Thursday, Canadian soldiers halted the evacuation of around 3,700 Canadian and Afghan nationals, stating that they had lasted as long as they could before the ultimatum expired. US and partner soldiers must also prepare their own exit logistics.

The blasts were close to them, according to a former interpreter with UK forces who was frantically waiting for an evacuating flight with his spouse, 3-month-old baby daughter, and 3-year-old son. His family is unharmed, but he described the situation as “apocalypse,” with “hurt people everywhere.”

In a sewage canal adjacent to the Kabul airport perimeter, a suicide bomber detonated – not inside the airport, but in a crowded choke point leading to the British and American positions, reports Sky’s Stewart Ramsay.

In recent days, British troops have been stationed at the Abbey gate entrance where the explosion occurred. After terrorist threats were issued, three gates were closed.

Location of the explosion 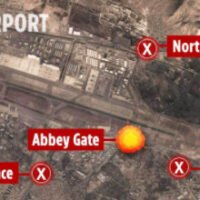 Abbey Gate of the Kabul airport. 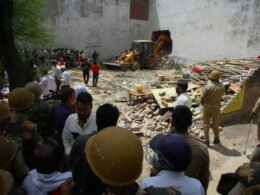