Priya Prakash Varrier got famous on social media a few days back. She earned 2.2 million Instagram followers after her clip went viral on social media from her new Malayalam film.

A guy from Hyderabad, India has lodged an FIR against Priya Prakash Varrier and the makers of Oru Adaar Love for insulting Islamic views, as reported by Pinkvilla website.

After the video of her winking went viral which was basically a song Manikya Malaraya Poovi in Malayalam, that guy translated the song lyrics to English and found out that the song was speaking derogatorily about Prophet Muhammad (PBUH) after finding it out, he has also reported it to the local authorities about it.

The song Manikya Malaraya Poovi has official music video which shows two youngsters are flirting with each other by winking. A clip from this song which showed Priya Prakash Varrier winking at the other guy went viral. This song is composed by Thalassery K Refeeque and recreated by Shaan Rahman.

The movie Oru Adaar Love is directed by Omar Lulu. This movie will be a romantic drama and will be the hit for the generations to come, as per Director’s point of view.

Muslims all around the world is sad and full of anger after knowing that this song is insulting the views of Islam and insulting the Prophet Muhammad (PBUH) who all the Muslims follow by their hearts and soul.

All Muslims have decided to boycott this movie and all of its event and requesting the other Muslims to not to promote such content who disrespects the image of Islam and Muhammad Peace Be Upon Him. Many Muslims have started online petitions as well to fight against this and want justice over the insult of Muhammad Prophet Peace Be Upon Him’s insult in this song.

What are your views regarding this news? Let us know in the comments below! 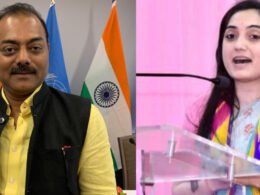