MADINAH (Saudi Arabia): Saudi authorities have arrested PTI (Pakistan Tehreek-e-Insaaf) supporters who violated the sanctity of the Prophet (PBUH)’s Mosque and are preparing to punish the suspects severely.

A total of 5 people have been arrested and sentenced to five years in prison, 60,000 riyals in fines, and lifetime bans on Hajj and Umrah for desecration of the Prophet’s Mosque.

Those who chanted the slogans or used abusive language are expected to be flogged and sentenced to life imprisonment following a thorough investigation. Pakistani Umrah and Hajj visa policies are likely to be updated now and the conditions will be stricter.

Video clips circulated on social media showed the crowd chasing the government team and shouting slogans that were unethical and immoral.

Sahibzada Jahangir alias Chico and three other friends of Imran Khan have also been arrested by the Saudi government in connection with allegedly raising political slogans and insulting Masjid Nabvi together at Masjid Nabvi.

Supporters of the PTI chanted slogans in Masjid-e-Nabawi upon the arrival of the Saudi delegation last night, as well as clashed with the government officials. The Saudi government has arrested those responsible. 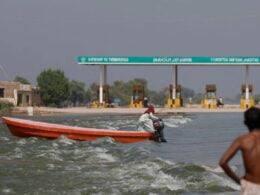