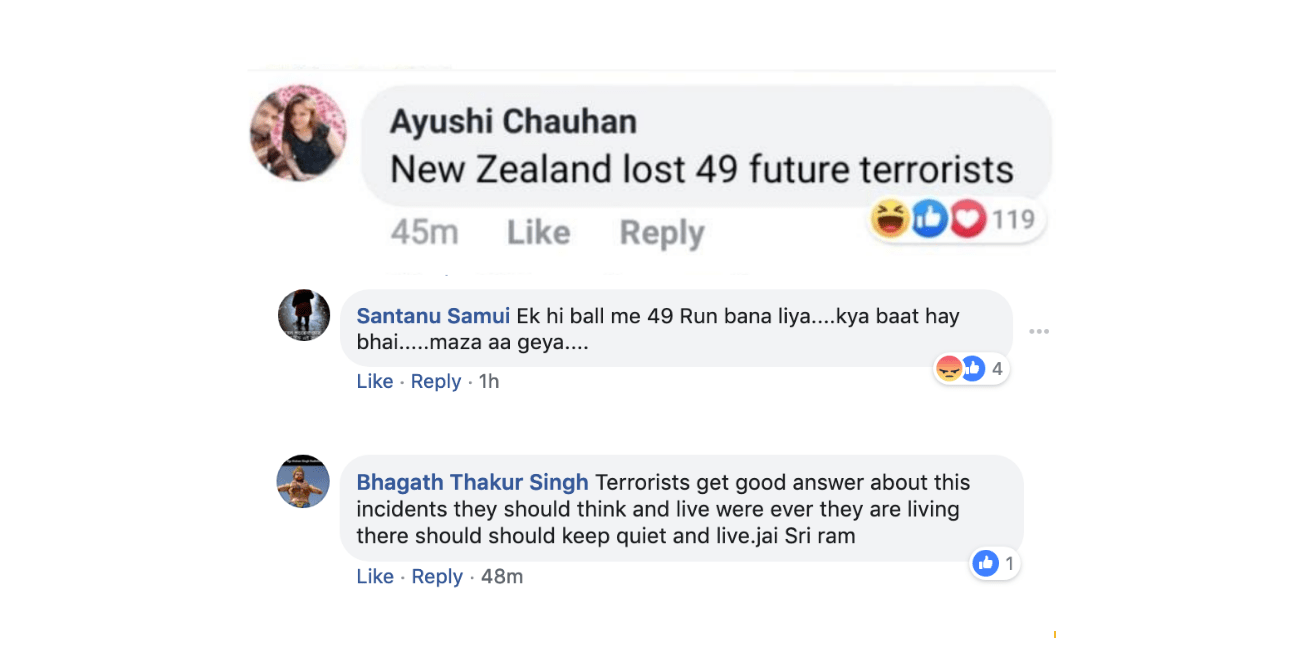 As the world, Muslims, Jews, and Christians are mourning the New Zealand Terror attack, on the other hand, these Indian accounts are celebrating it.

At least 50 people have been reported dead, which includes Children as young as 3 years old to the women, were killed by a terrorist attack on the Al Noor and Linwood mosque in Christchurch, New Zealand, Making it the worst mass shooting ever in the history of humanity.

The terrorist, 28 years old Australian born Brenton Harrison Tarrant live streamed this attack live on Facebook for at least 17 minutes. In which he showed killing off a number of people while broadcasting it live.

India’s right-wing Anti Muslim hate mongers have been celebrating this terrorist attack all over social media by calling the whole incident as a “well-deserved lesson” and have been openly praising the attacker as a “brave men” as the Indian forces are sitting idle on this and are not taking any action on this.

Twitter and Facebook were filled with all Anti-Muslim and Anti-Islam comments against Muslims, with many Indians claiming terrorist as a “Hero” for gunning Muslims.

A great rise in hate speech and attack on Muslims is being spread in India, that is triggered by the Indian’s Anti-Muslim political leadership who also warned Muslims that Hindus will soon attack the Kaaba and supported Fraser, an Australian senator who blamed Muslims for this attack.

Even after passing many days, Indian Prime Minister has not been condemned this brutal attack on twitter.

In India, Muslims are instantly linked with terrorism without having any proof, and this new row of hate speech over social media accounts will further become a burden on Muslim minority suffering in India.

Indians are inner dead people. They have no values no ethics just like their leader. They are making fun of the newzealand terrorist attack in social media. They should be ashamed.

There are bad people everywhere, we shouldn’t care about their opinions & as a Muslim we should co-operate with each other in bad or good thats what we’re lacking,
theres a Hadith: Muslim together example is like a body, One part of Body is in pain, whole body feels it.
So we shouldn’t care about them and continue going to mosques this cowardly terror attack ain’t gonna put 1 % impact in our routines
JazakAllah

Arab and Gulf countries must stop taking indians (hindus) inside the Gulf and Arab countries. the money they(Indians) earn in the gulf countries, is being used at anti-Muslim efforts….

If they have money then they are not terrorists …Hindus logic

We don’t expect anything good from Indians! We are not surprised at all! These comments are so expected from these historically proven human-faced beasts!

Yesterday i saw one of your leaders repeatedly admitted how mindless indians are and tday i happen to believe it. There is no religion above the humamity. We as muslims dont encourage deadly massacres, before that we used to say a muslim wil not torture or slauter another human in the status of a muslim. Those who kill or encourage killers are not from islam. In the name of muslims, christians, jews or cowworshippers, those who bring terror, we condemn the act not the religion.

Sunny singh, vinay Kumar, Rupali rajput are firmly terrorist, kick them out from overseas.
Firmely they are animal just human looks, you terrorist are fuck each other

For sure. It generates from the Shudras..