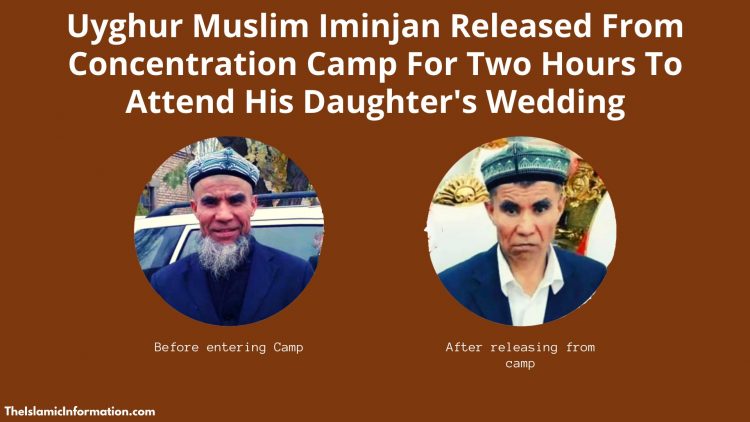 IUyghur Muslim, iminjan, was released from a concentration camp for two hours after his family pleaded with Chinese authority to attend his daughter’s wedding.

Uyghurs are the ethnic group originating from and culturally affiliated with the general region of Central and East Asia. The Uyghurs are known as natives to the Xinjiang Uyghur Autonomous Region in Northwest China. They are considered to be one of China’s 55 officially recognized ethnic minorities.

The government of China recognises them as a regional minority and the titular people of Xinjiang.

The Uyghurs gradually started to become Islamized in the 10th century, and by the 16th century, most Uyghurs were identified as Muslims. Islam has since played an important role in Uyghur culture and identity.

Most of the Uyghurs are agriculturists and maintain the constructs of the karez. They are also well known for manufacturing traditional handicrafts.

SUFFERING OF THE UYGHURS

In some parts of China, there has been systematic oppression of Muslims for years. Still, the government of Muslim countries are silent about the serious current allegations of ethnic cleansing and genocide. But China has been accused by some western governments of its undeterred oppressive acts.

According to the report prepared by more than 50 international experts, it was found out that the Chinese government has violated five of the acts which constitute genocide.

According to the latest media, children were separated from their parents. They are also selling the organs of Uyghur Muslims. At least 1 million Muslim minority Uyghurs are held in Chinese government-run detention centres.