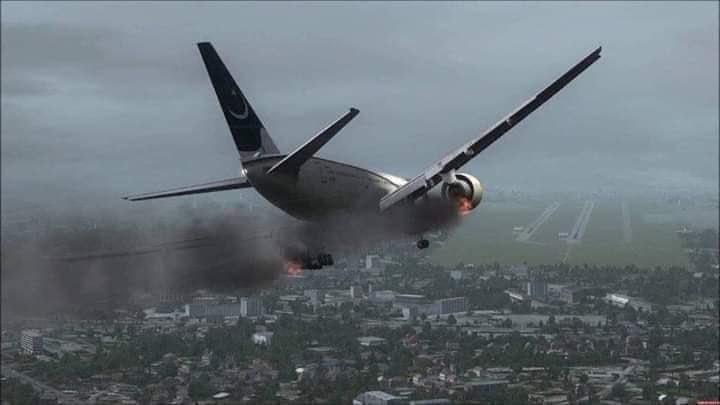 PIA PK 8303 was carrying 99 passengers from Lahore to Karachi, was crashed sixty seconds before the landing in Pakistan. This heartbreaking note will leave you in tears.

There’s something uniquely sharp about the grief in which people beg for their life before dying, but are only granted enough to imagine their loved ones one more time. It also becomes specifically more painful knowing that had the situation been slightly different, you would’ve been begging too.

For me, I think the time at which the captain and passengers realized the plane was going to crash, is most painful when I imagine it. I imagine the moments before that, two minutes to landing; a mother applying make up to her face, telling her kids to behave through the weekend, a husband texting his wife “Almost about to land. see you in a bit.”Or an air hostess sighing to her colleague saying, “shukar ha, abh eid tak chutti hogi (Thank God, we can go on Eid Vacations)”

I imagine the people waiting at the ‘domestic flights arrival terminal’ at the airport. Someone was about to meet someone after years, and someone had realized that they cannot bear a moment apart from someone. Both waiting eagerly to embrace their beloveds.

And in the next moment, everyone is screaming, the plane is careening towards the ground, young children are clutching on to the hand of whatever guardian vowed to protect them, hoping for him/her to save them. There’s a chorus repeatedly reciting the name of god in hopes to be saved to see their loved ones once more. And I imagine it is a question of what our instincts tell us about survival, of seeking hope when you are hopeless. Everyone is strangled to their seats unable to free themselves in panic, and I can imagine how praying to god and seatbelts may seem the same in this moment, both meant to save us, and yet both useless.

I am most gutted by how in moments like these, it doesn’t really matter if you’re in the business class, the economy or whatever way you’ve been reminded of where you come from. Death is merciless but equal for everyone. Trauma, is equal for everyone.

And then the plane crashes, and a father waiting for his daughter turns to a news channel and reads about a plane crash, and he hesitates but then tells the mother who is cooking her favorite meal for iftar. And they both shiver in fright, and the father calls the helpline and finds out that his daughter was on the flight. And it is said that a person dies more than once in his lifetime, they both die in that moment.

Grief cuts deeper when you realize that this could be your home and your parents. For me at least, EID won’t be the same this year, for more than one reason. I will be reminded of how a home is mourning a loved one as it bleeds through its windows every time someone smiles at me.