Turkish authorities on Saturday unilaterally canceled the planned visit of Swedish Minister of Defense Pal Jonson to the country.

Turkey took the decision following Sweden’s move to give permission to participants in the demonstration to burn the Holy Quran outside the Turkish Embassy in Stockholm, Sweden.

Turkey’s Minister of National Defense Hulusi Akar earlier on Friday said that the Swedish Defense Minister’s visit no longer has any significance as Sweden continues to allow “disgusting” demonstrations that end up blaspheming the faith of the Turkish nation. Akar stressed that Turkey would not remain silent on such Islamophobic action.

Jonson had previously planned his trip to Ankara next week. The visit was scheduled at Akar’s invitation, as Sweden hopes to persuade Turkey to ratify Stockholm’s proposal to join NATO immediately.

Turkey has long been known to oppose Sweden’s accession to NATO and demanded that Sweden crack down on intolerant groups deemed to threaten Turkey as a Muslim country before agreeing to their accession to NATO.

Recently Turkey has summoned the Swedish ambassador to inquire about the permission granted by the authorities of the Nordic country to the demonstrators who staged a protest in front of the Turkish Embassy in Stockholm this Saturday. The ambassador was told by a foreign ministry official that Sweden’s permission to protest under the pretext of protecting democratic values was unacceptable and a blatant hate crime.

Responding to the unfortunate event, Turkish Presidential Spokesperson Ibrahim Kalin on his Twitter account, called the burning of the Quran in Stockholm a hate crime and a crime against humanity. Ruling party spokesman Omer Celik accused Swedish authorities of harboring hate crimes.

Meanwhile, Turkish Foreign Minister Mevlut Cavusoglu said that attacking the Quran cannot be considered freedom of expression and hoped that the Swedish authorities would cancel the protest permit. He added that racism and hate crimes are not freedom of thought. 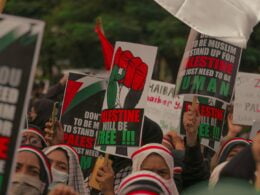