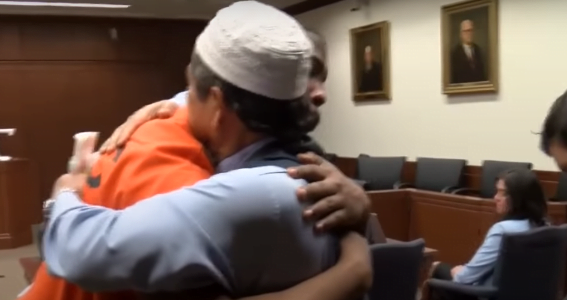 Muslim Man Forgives his son’s killer. He did not just forgive him but even hugged the murderer. This video will be the most emotional thing you will ever watch.

The man’s son’s killer Relford was sentenced to 31 years in prison.

In the state of US state of Kentucky, a young pizza delivery guy was murdered by Relford and after finding him guilty the court had sentenced him to 31 years in prison.

Abdul-Munim Sombat Jitmoud, during the sentencing hearing on Tuesday, hugged Trey Alexander Relford, who started crying after seeing his generosity. All of this was broadcasted live on CNN.

After hearing all this thing, Trey Alexander Relford had no words to describe, after he had been forgiven he started crying he said, “What happened that day is unforgivable and unforgettable, he further said he is very sorry for their loss and said he cannot bring what he had stolen from them.”

Watch this incredible video in which Muslim Man Forgives his Son’s Murderer with a hug, this video moved many hearts around the word

Watch How Muhammad Iqbal's Poetry Converted A Researcher To Islam