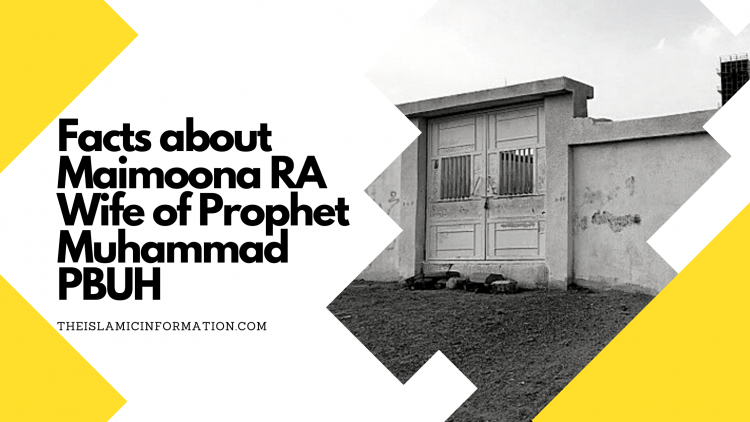 Maimoona (RA) was the Prophet’s wife (PBUH) and is known to be the Prophet Muhammad’s last wife (PBUH). She was known as one of the mothers of believers.

All of the Prophet’s wives (PBUH) had brilliant character and personality, and the same was with Hazrat Maymoonah. Some astounding facts about the life of Maymoonah R.A given below:

1. The name of Maimoona R.A was “Barrah”

Her original name was Barrah. However, the Holy Prophet (PBUH) used to call her by the name of Maymoonah, which means “the blessed one.” Because this was his first time visiting his home town in Makkah after several years, Maymoonah R.A was the daughter of Harith-bin-Hazan.

The Holy Prophet Muhammad (PBUH) went to the city of Makkah to perform Umrah, as a part of the signing of the treaty of Hudabiyah. So Maimoona (RA) proposed marriage to the Holy Prophet (PBUH), and he accepted it. Maymoonah was also the sister in law of Abbas (may Allah be pleased). She was a very devoting and long-time supporter of the Holy Prophet during the early days of Prophethood.

3. Before this marriage, She (RA) had already married twice

Maymunah R.A spent a responsible life as a Prophet’s wife (PBUH) and did not give up during difficult times. She died a natural death at the age of 81, and she is buried at the same place where she met, married, and stayed with the Prophet (PBUH).

Her grave is located on Hijrah Road, which is 20 km away from Makkah. It is a locality named Sarif.

4. She was the most mindful among the wives of the Holy Prophet (SAWW)

Ayesha (may Allah be pleased with her) stated Maymoonah R.A, which outlined her character. She said that Maymoonah was most kind and most mindful among her relatives and family and Prophets wives.

5. Maimoona (RA) used to do Miswak

Yazid-bin-Asam told that Maimoona (RA) stayed either busy in prayers or household chores. If she was done with both, she used to do Miswak, which describes her character that she loved her religion and cleanliness.

Major questions that we answered;