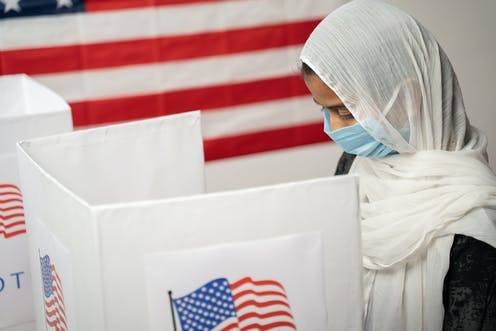 US Election 2020 was a big race between Donald Trump and Joe Biden, about 70% of Muslims voted for Biden which played an important role in his victory for Presidential race.

An ITV news correspondent, Rebecca Barry has been covering Muslim Communities during the US Election 2020, and she said that she was amazed to see many Mosques have promoted American Muslims during Friday sermon to “Must-Vote” during the Election day 2020.

Rebecca had coffee with Imam Qazwini in his office, where he said that years under Donald Trump American Muslims have face ban as well as incidents of Islamophobia, that motivated Muslims to vote for Joe Biden.

Why did American Muslims voted for Joe Biden?

According to CAIR, 70% of the American Muslims voted for Joe Biden and Kamala Harris because they ensured giving Muslims equal rights and promised elimination of Islamophobia. During the Presidency of Donald Trump, Muslims faced discrimination, bans, and incidents of Islamophobia.

Majorly the reason why Muslims backed Biden can be the Travel Ban which Muslims faced (in some countries) imposed by the Trump administration. And Joe Biden has promised Muslims to end the Travel ban.

Kane Farabaugh from Voice of America says that Muslims in America are more politically aware than the 2016 elections. According to Pew Research Center, Muslims may be a minority in the United States but they have a great influence on the US Elections 2020.

The reason for their significant impact is that American Muslims are mainly living in the big cities of America. Muslims chose the Democratic party as they expect the party to fulfill their demands as compared to republicans.

On the other hand, Trump’s poor handling of Coronavirus also changed the Muslim’s perspective of Trump’s administration.

Every prez of the US is a puppet in the hands of the zionists. Unless the zionist lobby in the US Senate is done away with, Muslims all over the world can never live in peace.