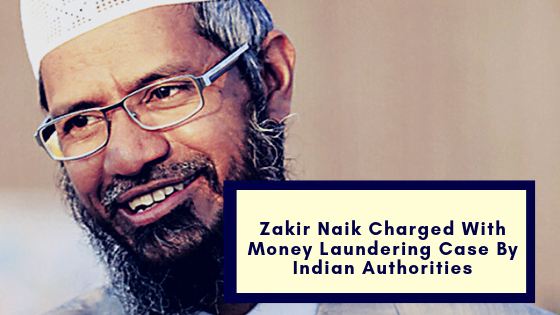 Money Laundering Case has been registered by Indian authorities against a famous Islamic preacher, Zakir Naik who is currently living in Malaysia.

The Hindu reported that India’s Enforcement Directorate has initiated an inquiry to charge and arrest Zakir Naik.

As per reports of BBC, Dr. Zakir Naik is accused of having $28 million worth of assets which Zakir Naik has denied. Furthermore, the BBC also stated that Zakir Naik is also accused of spreading terrorism and hate speech by Indian authorities.

Indian authorities have told the court that the assets which Zakir Naik have a value of 1.93 billion Indian rupees and properties owned by him totaled a cost of INR. 504,600 in this case.

The report presented in court today in Mumbai also learned that IRF (Islamic Research Foundation) received INR. 648,600 from 2003 till 2017, Mostly from unknown sources and a large part of the money donated was used to organize conferences.

As well as from 2012 and 2016 INR. 492,000 were transferred from Zakir Naik’s United Arab Emirate (UAE) accounts to his personal accounts in India.