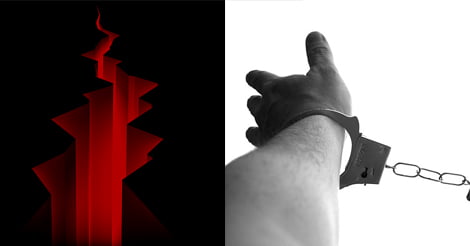 Haram is an Arabic word which means “Forbidden”. Haram is the things which are prohibited in the Quran and the Sunnah, things Muslim cannot do. And violated your soul.

This is a long debate, we must have seen that some of the scholars are calling it Halal while others are calling Haram, to counter this, we have added Zakir Naik’s stance about this matter;

Furthermore, we can see the authenticity of prohibition here in Al-Jaamius Sagheer

Drinking and Gambling are one of the greatest sins in Islam. Allah and his prophet (PBUH) have prohibited us from Drinking alcohol. In Quran, this is written;

Furthermore, it is stated that;

3. Hitting oneself or the other

If you are hitting yourself (Such as your face or chest) in grief or anything or hitting any other person (Your child or any other Muslim brother) is strictly Haram! In Quran it is stated; (Killing does not mean taking life only, it also means to hurt anyone)

Riba (Interest) is never allowed in Islam because it is a system that makes poor the poorest and rich the richest!

Silk and Gold are Haram on Men. Because these two things are attributed to women only, and Islam prohibits Men to be like Women, and Women to be like Men.

Tattoos are strictly prohibited in Islam. In Bukhari it is stated;

In this era, we often see people committing suicide, especially the young people are already into it. A few days back we talked about Depression Cures taught by Ali (RA). Allah tests his people in different ways, we should not try to skip this part. There is a Hadith in Bukhari which states;

Forcing your spouse is one of the biggest sins you will ever commit. Our beloved Prophet Muhammad (PBUH) has taught us to be very friendly with your Wife, even stated that make her your best friend!

May Allah Abstain All The Muslims To Commit These Haram Things!

Thanks for telling me about other haram things

we need to learn islam deeply without islam we are empty.

assalamu alaikum, i just saw this comment and it reminded me of what my teacher once told me and i wanted to share it. My teacher once said ” If you want to but the price of this life and sell the price of the second life, do what you want but dont regret it later.” It’s like your selling sheep for one bag of wheat you need to use for a party , yes you can make bread at the party but one everyone has eaten you’ll realise it’s a one time thing. However the sheep you sold could’ve… Read more »

Exactly same with me , besides. Music makes me feel good and feel free.

When it comes to riba we only talk about taking interest. We don’t talk about giving, as it will create a lot of problems I know. Because most of us bought our houses and cars and other things on interest but we have the excuse that we don’t take it but we give it. Often times we forget to mention that our beloved prophet said giving and receiving riba is the same crime. May Allah SWT give us the ability to stay away from RIBA.

This is basic stuff that most people know

im sorry but i dont agree with the music point, ofcourse you should listen to music with clean lyrics, but music in general are not haram, music or melodies are the roots of the quoran, tajwid is a great example of beautiful melodies and singing, islam is a religion of moderacion, so things shouldent be black or white, there is haram music ( that includs vulgar words and dances), but there is a lot of halal music, witch is even healthy for you.

I shall keep this in mind forever. 🙂

im happy i learned these things