Home » Blogs » 3 Non-Muslims Praised By Prophet Muhammad PBUH, Who Are They? 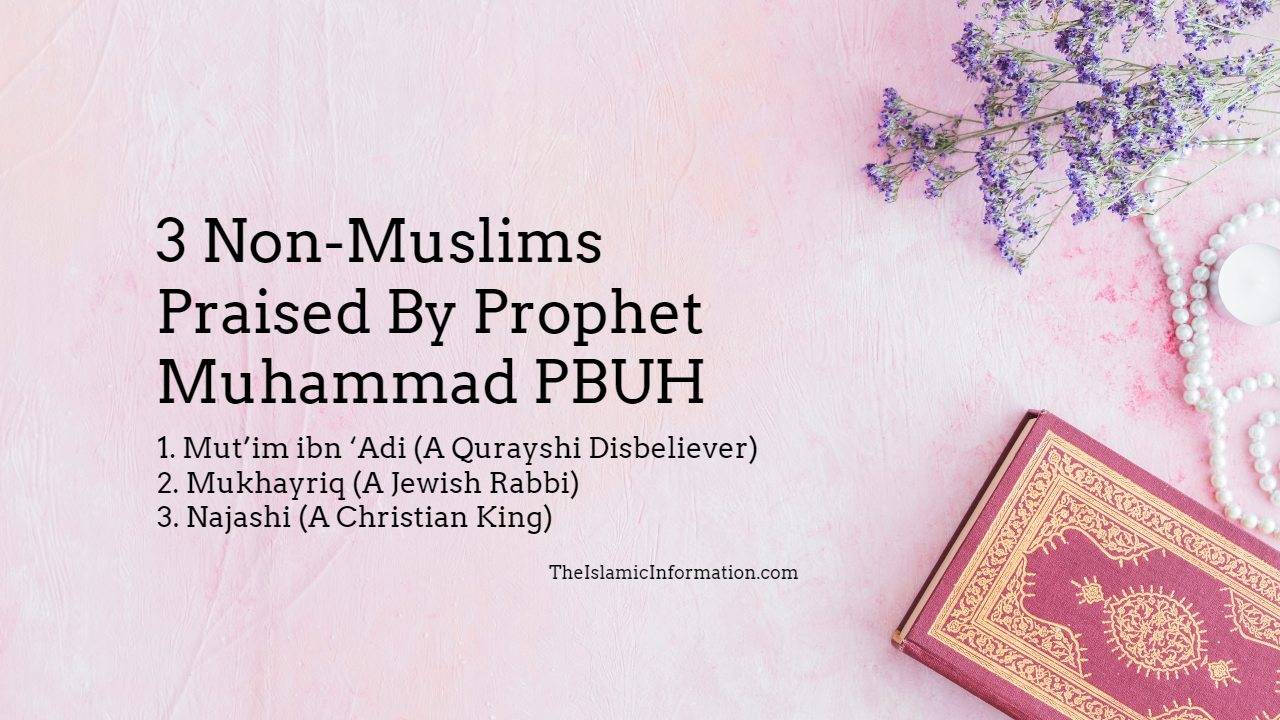 In the era of the Prophet, it was an unhappy time. The Prophet Muhammad (PBUH), being wounded and humiliated by the locals while returning from Ta’if. With the recent death of Uncle Abu Talib, He (PBUH) was completely unprotected within Makkah, where the locals were freely moving around to thrust him with their swords.

Within such a situation, entering in Makkah was similar to suicide. Therefore, He (PBUH) sent His messengers to Makkah’s various noblemen to request for protection and safety. Only one man accepted to help Him, a Quraishi disbeliever, Mut’im ibn ‘Adi.

He was one of those who had already helped concerning the Quraishi boycott, in the past, that resulted in the starving of the whole tribe of Prophet (PBUH) for three years. He again immediately sent a supportive answer on hearing that Prophet (PBUH) has requested for his help.

After this, Prophet Muhammad PBUH walked into the city of Makkah, protected by Mut’im and his sons, who were carrying weapons to protect him (PBUH). They went to Kaaba and Mut’im called out from the mount;

Prophet Muhammad PBUH offered 2 Rakahs of Salah after that Mutim and his sons escorted him to his house in Makkah. (Al-Qahtani 144)

After a few years, after the Battle of Badr, Muslims had captured a number of prisoners of war from Quraish after winning the battle. While remembering Mutim, Prophet Muhammad PBUH said;

After Hijrah, it was within the third year. The Muslims received the news that a massive army of Quraysh is moving towards them to attack. They went towards the Uhdud mountain to wait until the arrival of those enemies. However, they were in intense straits outnumbering three to one.

Madinah’s Jews formed a treaty with the Muslims to secure them if Madinah is attacked. Yet, none of them acted upon the treaty except one person, Mukhayriq.

Dhahabi has quoted the ibn Is’haq’s version of Mukhayriq’s story. He stated that initially, Mukhayriq requested the locals of his tribe to help Prophet (PBUH) by reminding them about the treaty.

He said “O Jews, You know it very well that Muhammad (PBUH) victory is upon you.”

Jews answered, “Today is the Sabbath.”

Then Mukhairiq took his equipment and sword and went out saying;

Then he went to Uhud and fought until his last breath and the Prophet PBUH said this about him;

A decade before, the Muslims of Makkah were being imprisoned, persecuted, and tortured. Allah didn’t allow them to fight back and also, they were in a lesser amount than even fighting them back would mean the ending of Islam.

Within this moment, the Prophet allowed some Muslims to escape away from Makkah. But where they could go?

Because Quraysh won’t let them live with peace anywhere. Who would secure the Muslims in a foreign place, living among strangers, when their own locals were after them. Yet, the Prophet (PBUH) recommended a name; Najashi.

This was a title given to the king of Abyssinia. His real name was Ashamah.

Initially, a few Muslims then a bigger group of 19 women and 83 men traveled to Abyssinia to seek asylum.

They were welcomed with open arms by the king. Even when Quraysh sent out emissaries to transform him against the Muslims, he responded to them in a way a king should do. He gathered the Muslims as well as the Quraysh in his court and listened to both sides of the stories.

The Quraysh sent out two delegates along with expensive gifts for the king to convince him for expelling the Muslims from his territory.

And when An-Najashi learned about the beauty of Islam, and about all the wonderful things concerning Jesus and Mary, he returned the gifts back to the Quraysh and said that on any terms I won’t expel my honored guests from the kingdom. (Al-Qahtani 140)

Later, Najashi accepted Islam and became a Muslim. However, it was all before the time he had any knowledge regarding Islam that the Prophet (PBUH) selected him over all the kings and the leaders and trusted him concerning care for His tribe.

The Muslims stayed in Abyssinia for as long as they wanted to and within this time, they freely practiced Islam. And then after many years, they returned to Madinah where the Prophet (PBUH) already developed His successful state, during the year of the Khaybar conquest.

When the king died, the Prophet Muhammad (PBUH) and His companions prayed funeral over him (in absentia) and the Prophet (PBUH) stated:

Do share this information with your friends and on your social media to educate more people about it.