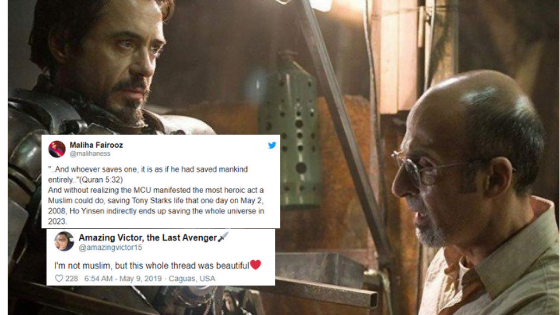 Marvel Universe is saved by a Muslim character introduced in the Marvel series and people all around the world is in shock to realize that.

NOTE: if you haven’t watch Marvel’s New movie Avengers: End Game, there are spoilers ahead!

A Twitter account has started a discussion explaining how a Muslim man saved MCU (Marvel Cinematic Universe), and this discussion got about 20,000 retweets, reported The Independent.

Iron Man (Tony Stark) sacrificed his life to defeat the villain Thanos by snapping his fingers and died due to the high energy reaction from the infinity gauntlet.

Iron Man is loved globally for innovative tech superhero which debuted back in 2008.

Back in the day, Iron Man was captured in Afghanistan by a terrorist group called the Ten Rings. He meets a prisoner, a doctor called Yinsen and then befriended with him.

Yinsen placed the electromagnetic device and implant in his chest, which stopped bits of shrapnel from reaching Iron man’s heart. And later, Yinsen was murdered by the terrorists.

A Marvel enthusiast, Twitter user @malihaness made a discovery that the Muslim character who saved Tony Stark’s life in 2008, indirectly saved Marvel universe in the year 2023. This might seem a normal character playing an act of heroism, but this little act proved to be a big one.

Her tweets went viral all around the world, with Muslims and Non-Muslims expressed their love for her beautiful writing.

Before this, Marvel got a lot of criticism of not welcoming more black superheroes and showing Muslims as a part of terrorist groups, so Marvel has now started taking more black and Muslim characters to their universe.

What do you think about this thread? Do you agree with what she has told in the tweets above? Let us know in the comments box below.

she even has to truncate the 5:32 verse, which reads ” Because of that, We decreed upon the Children of Israel (ie JEWS) that whoever kills a soul unless for a soul or for corruption [done] in the land – it is as if he had slain mankind entirely. And whoever saves one – it is as if he had saved mankind entirely. And our messengers had certainly come to them with clear proofs. Then indeed many of them, [even] after that, throughout the land, were transgressors.” And that in itself is taken from the Torah’s Cain and Abel, where… Read more »