Biggest Mosque in the Europe was inaugurated by Turkish President Recep Tayyip Erdogan as he ends his official visit to Germany on a positive note.

German government had to go through a huge police operation before the inauguration of this mosque, as there were a lot of protestors protesting opening a mosque in the vicinity.

Here you can see the full inauguration ceremony: 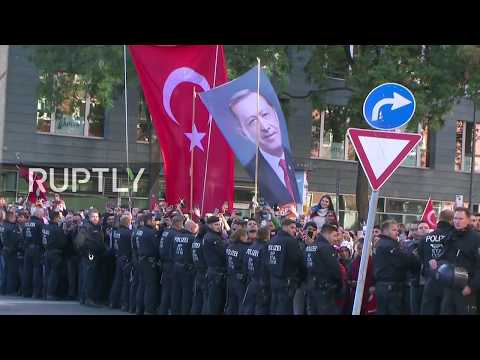 The mosque looks so beautiful as it adds a lot of beauty in the German city, Cologne. It will also be a point of attraction for the Muslims and the other people around the city.

Cologne’s Central Mosque is being build with the help of a religious group ethically working for the betterment of Islam in Germany, and they have close ties with Turkish government which made it possible for Erdogan to make this mosque.

As per Islamic teachings, building a mosque in any place in the world means that you are actually building a house in Jannah (Heaven), and whoever prayers in the mosque one built, all the reward (Sawaab) will go to the person who make it happen.

It is a big achievement for Turkish President to reach that milestone by opening a biggest mosque of Europe.

We hope to see more positive things coming out in this world after this generous step taken by German government.