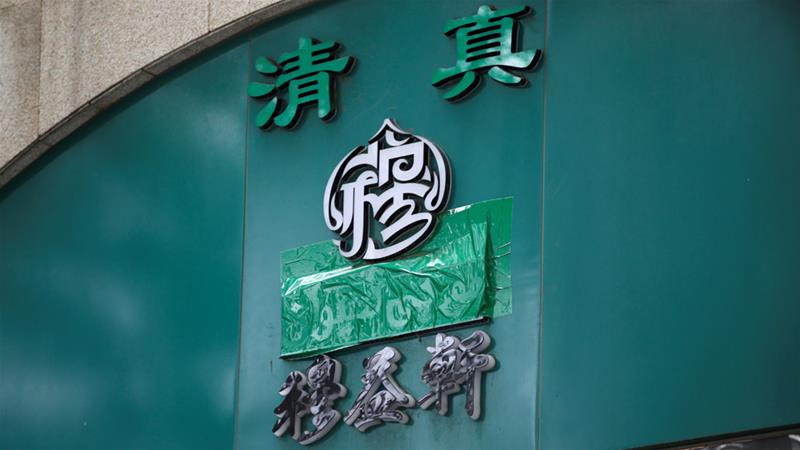 Arabic Quranic Symbols have been asked to take down after government orders instant ban on all Arabic writings.

Chinese authorities in the capital city of China, Beijing have ordered all the Halal food stalls and restaurants to remove Arabic symbols and script linked with Islam in order to sinicize the Muslim population.

11 restaurants have been given notices to urgently remove all the Arabic quranic symbols to be removed immediately, that includes the word “Halal” and crescent moon sign.

Government officials are making restaurants owners cover all the Arabic words and symbols and watching them do it.

This campaign seems to be a part of the long-lasting campaign against Muslims in China. The Chinese government has also been demolishing mosques in China and sending the Muslims into education camps.

China has a Muslim population of 20 million, but the government now want them to be converted into the religion of the state. Not just Muslims, the Chinese government has also started a crackdown on Christian and their churches.

The crackdown started from the year 2009 when Han Chinese in Xinjiang has started a movement against Muslims of China.

Recently the capital city of China, Beijing has also banned Halal food in the city. Apparently, there are many Muslims countries who are friends with China, including Pakistan who openly call China as their true and loyal friend, has not raised this issue on an international level.

International press and journalists are prohibited to enter the premises such as Xinjiang, where mass Muslim prosecution is happening, China is currently blacking out the news.

Muslim leaders all around the world are calling it the same genocide which happened in Burma with Muslims. Saying that soon the Chinese government will force them to adopt their culture as well.

What do you think about this step taken by the Chinese government? Let us and our readers know what you have to say on this in the comment box below.