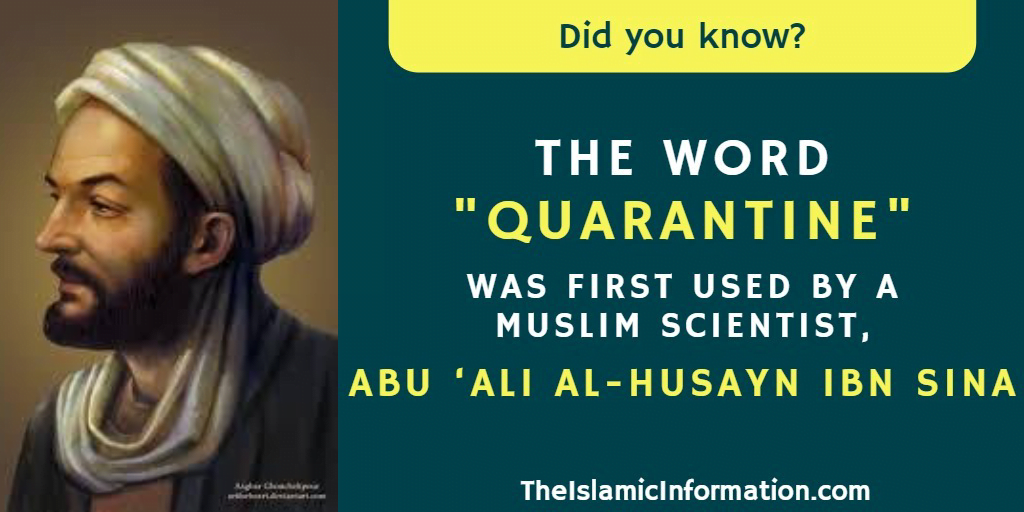 Are you aware of the fact that the Muslim scientist, Abu ‘Ali al-Husayn ibn Sina, had first coined the term “Quarantine” in his work? In the west, he is well-known with the name of “Avicenna”.

At that time, he doubted that there were few diseases that get transmitted by microorganisms and its prevention was known only by opting self-distancing the public for 40 days.

He named this method as Al-Arba’in Iya meaning forty-forty days. Ibn Sina is also known as Pur Sina, Abu Ali Sina, and Avicenna. Being a Persian polymath, he was also regarded among the highly famous astronomers, physicians, thinkers and writers of the Golden Age of Islam.

Avicenna (A.K.A Ibn Sina) is also remembered as the father of early modern science. He succeeded in being the pre-modern era’s highly influential philosopher.

Motivated by Aristotelian philosophy, Ibn Sina was a peripatetic philosopher. Approximately, his 240 written work succeeded out of the total 450 he produced. The surviving one involves 40 in medicine and 150 for the philosophy aspect.

His introduced method reached in Italy and throughout Europe with the help of merchants of Venice. And they named it “Quarantena” (In English Quarantine) which means “forty” in the Italian language.

And gradually, the word “quarantine” got developed. Originally belonging to the Islamic world, this method is being utilized at the present moment throughout the whole globe to combat the coronavirus.

And even in the present era, Ibn Sina has saved millions of lives throughout the world with his Al-Arba’in Iya method. His well-known work includes; The Canon of Medicine, a medical encyclopedia which is now as the standard medical textbooks in a lot of Universities.

He also wrote a scientific and philosophical encyclopedia known as The Book of Healing. His other books can be found on alchemy, psychology, logic, mathematics, Islamic theology, astronomy, physics, geography and geology and works of poetry are available too.