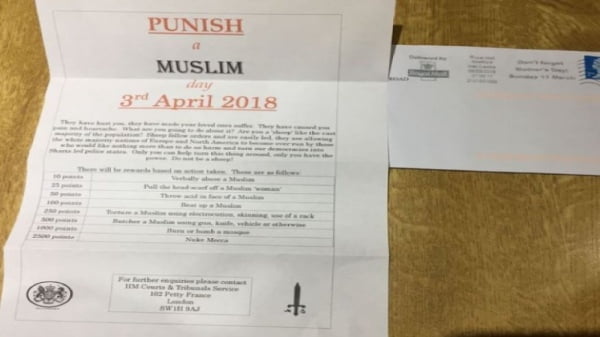 DEADLY PURGE event is taking place in the United Kingdom. The police have received a note which shows if a person beats up a Muslim in the UK on this specific day will earn reward points!

In the UK they are preparing the “Bartholomew’s Night” for Muslims. The letter contains a list of violent actions and the number of points that can be obtained for their implementation. They are calling it Bartholomew’s Night which is driven from St. Bartholomew’s Day massacre when there was a grand massacre between the religious groups.

In a number of locations in the UK, these letters were posted by mail influencing for the massacre of Muslims. Anonymous posted letters with calls to participate in the “Day of the Punishment of Muslims”. This is written by the British media.

What is a Purge?

Purge means that you kill a person or destroy their places such as their homes, worship places and many other things during a specific date is called a purge, many movies can be taken as a reference here just like PURGE ANARCHY, these events such as a grand deadly purge against the Muslims are motivated by such movies.

What Does Purge for Muslim Means?

The letter contains a list of violent actions and the number of points that can be obtained for their implementation. In particular, it is called to kill the faithful, pour acid on them, and also to set fire to and blow up mosques.

“Letters of hatred” caused alarm among Muslims, human rights organizations and politicians. The police have begun investigating who has initiated this event. While nothing else has been made public as of now due to the confidentiality of the case. And the police seem to investigate the situation and have asked all the Muslim communities to calm down.