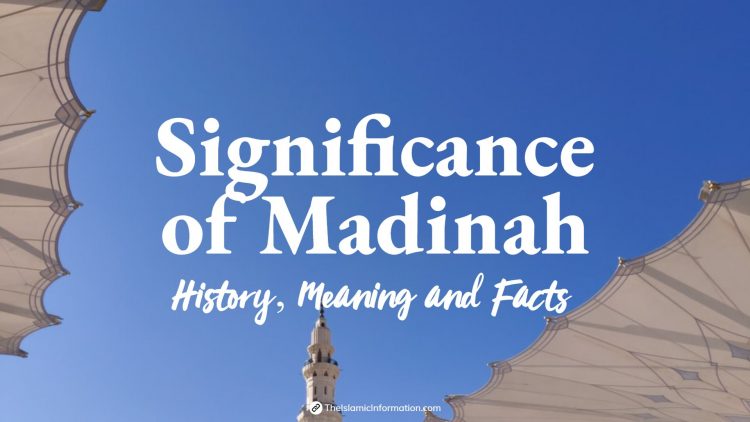 Medina, the city of Prophet Muhammad (PBUH), is a city where he settled down until his last breath. His companions supported the true religion of Islam. In this city, the stronghold of Islam, rewards for good deeds are multiplied.

Medina is a city in the Hejaz region of the Arabian Peninsula and administrative headquarters of the Al-Medina Region of Saudi Arabia. The Prophet’s Mosque, al-Masjid an-Nabawi, is in the heart of this city, a mosque established and originally built by our Prophet Muhammad (PBUH).

What is Medina? It is more than a city!

It is the second holiest city in Islam after Makkah, where Muhammad’s burial place (PBUH) is situated. The city of Madinah was Prophet Muhammad PBUH’s destination of his migration (Hijrah) from Makkah. Madinah became the center of the rapidly increasing Muslim Empire under the leadership of Prophet Muhammad (PBUH). The city is protected by angels day and night. When the Dajjal travels all over the world, it will not be able to enter Medina.

This city is historically important because the Prophet Muhammad (PBUH) lived here after the Hijrah. It is essential for many historical reasons. Especially this city is very revered and holy for the Muslims. The city is home to the three oldest mosques in history, Masjid an Nabawi, Quba Mosque, and Masjid al-Qiblatayn (Mosque of two qiblas). The final Quranic surah that was revealed to Prophet Muhammad PBUH in the city of Madinah, is called Madni Surah.

It is the location of Hijrah (migration), the place where the Muhajireen and Ansar came together. And it is the center of jihad, from which the armies marched forth, and campaigns were launched from which lands were conquered, the religion spread and shirk, as well as the enemies of Islam, were defeated. Every one of Medina loved the Prophet (PBUH) and provided their soul and wealth to defend Islam’s religion.

Islam entered this city before the arrival of the Messenger, Muhammad (PBUH). Some men from the Khazraj tribe traveled to the city of Makkah, Prophet Muhammad (PBUH) invited them to Islam. They embraced Islam and returned to their homeland as preachers of Islam. The light of Islam spread at many homes in Medina.

By the next year, 12 residents of Medina took part in the pledge (Baiah) with the Prophet (PBUH). Later on, the Prophet of Mercy (PBUH) dispatched Musab bin Umair to Medina to teach the noble Quran and other religious rituals.

The old name of Madina

Islam became the predominant religion in Medina, and Muslims got power. Then Musab (RA) went back to Makkah. In the second pledge, 70 men and 2 women of Ansar took part in the Prophet’s pledge (PBUH). On Monday, Rabi-ul-Awwal 12, he migrated to Medina on the 13th year of his prophecy, May 16, 634 AD. Since that day, ‘Yathrib‘ changed its name to Medina.

There are no meaning of Yathrib, it was a self-made name given to the city (which is now Madinah).

With the settlement of the Prophet (PBUH) in Medina, the city got a new birth.

This news reached the Prophet (PBUH), and he summoned the Ansar and said, ‘What is this that I have heard about you?’ They were people who never told lies, so they said, ‘It is what you have heard.’