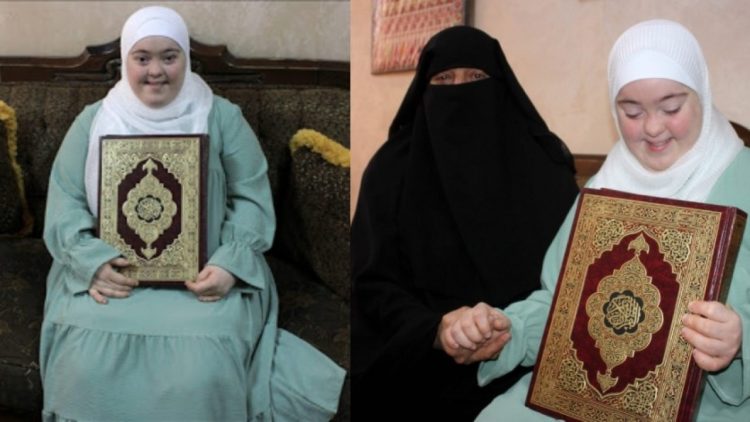 Pictures of a Jordanian girl named Rawwan al-Duwaik have been circulated in social networking lately. She is not an ordinary girl, Duwaik shocked the world as the first memorizer of the Holy Quran from Down syndrome.

In an interview with the Turkish news agency (Anatolia), Awatef Jaber, the mother of Rawwan al-Duwaik told how Rawan has made her proud.

Dweik, who suffers from this incurable condition always saying that the Quran is her life.

The mother added saying that Rawwan is a gift from the Lord of the worlds, Rawwan has increased her mother’s pride and honor.
Rawwan shows her intelligence from a very young age that’s when her mother began teaches her the shortest surahs and she memorized very quickly. She was enrolled in the school when she was 6 years old and she excelled at it.

According to her mother, she studied to the seventh grade and our Lord help her to learn through sounds pronunciation. However, she refused school after, then went down at her will.

Her mother added that when she was learning the rules of pronunciation and took Rawwan along with her to the center, where Prime Time Zone with Down Syndrom store everything. As the mother started memorizing 4 pages of Surah Al-Baqarah, the teacher told that Rawan has memorized the first part of the surah.

Her mother reveals the method she was using to memorizing it. Rawwan memorizing through writing, and it took her about a year and a half to memorized Surat Al Baqarah and took the full mark. Once she came out of the exam, she prostrated to God a prostration of thanks.

Rawwan continued to memorize the Qur’an at the regular pace for 7 years, and she completed it on the 29th of the last Ramadan 2021.

Her mother later explains that what distinguishes Rawwan most is her intelligence and what helped her to memorize is her correct pronunciation. Her mother said that her memorization of the Qur’an is the generosity of God, calling her as Crown of Dignity.

Rawwan with pride later saying that she read the Qur’an 3 times a day, and has read it all her life, she emphasized that she had memorized the Qur’an by heart.