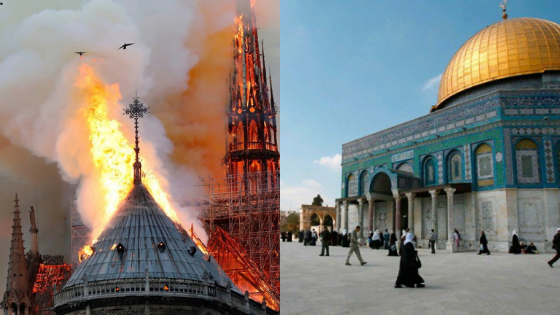 The fire broke out in the security guard’s room which is outside the roof of the Marwani Prayer Room.

But luckily the fire brigade squad of the Islamic Waqf successfully controlled the fire.

Many videos have been shared on social media showing smoke rising from the top of the Marwani Prayer room also known as Solomon’s Stables. Luckily, no injuries were reported.

At the same time in Paris, a huge fire broke out in Notre Dame cathedral, sinking the roof of the stunning French landmark after firefighters saved its main bell towers and out walls from collapsing.

Flames that started blazing in the early evening rapidly burst the roof of the 850 years old cathedral and engulfed the spire, and then the entire roof was collapsed. It took 8 hours to control the fire.