The purpose of organizing this Milad event was to promote inter-religious harmony among the Sikh and Muslim communities, says Chawla.

On Saturday last week, we could see the beauty of religious tolerance when the Sikh community held a Milad ceremony celebrating the birth anniversary of the Prophet Muhammad (PBUH) for the first time.

The Milad ceremony was held in front of Gurdwara Janam Asthan in Nankana Sahib, where the Sikh community was born.

Hundreds of Muslims and Sikhs were seen crowding the event venue.

It is known that the Milad event was organized by the Head of the Punjabi Sikh Community, Gopal Singh Chawla, and Minhajul Quran.

Sardar Gopal Singh Chawla, head of Punjabi Sikh Sangat, stated that the purpose of organizing this Milad event was to promote inter-religious harmony among the Sikh and Muslim communities, especially in Pakistan.

Chawla also emphasized that Gurdwara Sahih is not only for Sikhs but also for believers of all religions.

The Sikh Community also arranged a feast for the Muslim participants, and at the end of the event, a cake was cut by representatives of both communities.

In recent years, the Christian community has also participated in celebrating Eid Milad-Un-Nabi. Last year, the churches were decorated with beautiful lighting to celebrate this event.

Milad hosted by the Sikh community is also part of the countrywide celebrations to mark the birth of the Holy Prophet (PBUH) announced by the Pakistani government.

Earlier, the prime minister announced that the government would celebrate the Eid Milad-un-Nabi (PBUH) in full religious zeal and hold the most significant historical ceremony to mark this occasion. 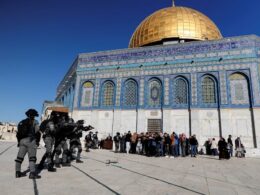