Deen Squad is a Muslim Rapper duo who remixes different famous pop songs into their own style but with their new video, they have crossed their line of ethics as they clearly mocked Masjid an Nabawi.

All of us are clearly aware that Islam is very strict about Music and all kinds of Musical instruments and prohibits Muslims to even listening to it. Then this new rapper duo who calls themselves Deen Squads pops up from nowhere showing their talents by mocking Islam’s most sacred place after Kaaba.

The rapper duo has rapped Camila Cabello’s new song “Havana” and made it all about “Madinah” and in the video, it looks so inappropriate that people are dancing with the Dome of Masjid an Nabawi.

The rapper duo consists of two people, Karter Zaher who is Lebanese-Canadian and the other person is Jae who is Ghanian-Canadian. Their latest remix had taken the internet by storm where sadly many people seem to enjoy it without knowing the sin they are committing.

On the other hand, the rap duo had faced a huge amount of criticism on social media after they keep releasing all kind of unethical songs and videos.

Listen to it yourself

Despite such criticism, they are not preventing from making hateful content that clearly goes against Islam. Recently they produced a new video called “God’s Plan” and made all of it about Allah, while originally this song was written by Drake telling about all of his false gods.

Getting fame by mocking Islam has never landed anyone anything in their lifetime. And this is indeed sad that no one is stopping these people from preaching the wrong Islam which is completely unacceptable.

What is your take on this rap duo, Deen Squad ? do raise your voice by writing about it in the comment section below. 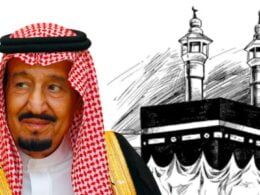