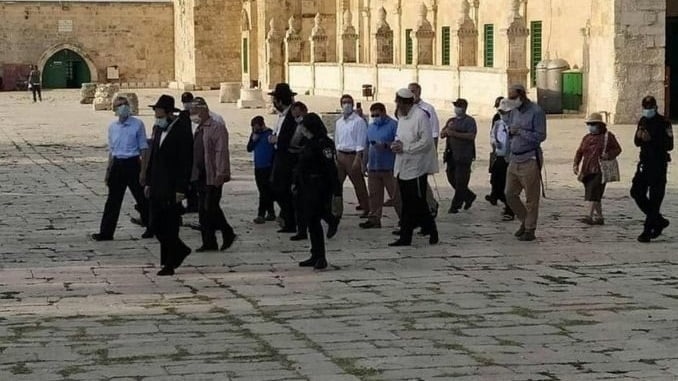 On Tuesday, the sacred Al-Aqsa mosque went under Israeli control as 91 Zionist settlers stormed it. At Al-Aqsa, 91 illegal Israeli settlers stormed and took a provocative tour of its yard and then planned to leave through the chained doors as told by the local sources to the news agency WAFA of Palestine.

A press statement was issued by the Ministry of Awqaf and Islamic affairs in Jerusalem, which controls the management of Al-Aqsa mosque told that the Al-Aqsa mosque was stormed by the 12 Jewish settlers who took tours and tried to perform Jewish rituals inside the mosque during the morning hours.

The people of Palestine have suffered different means of harassments, and there have been limitations on its pioneers. The Al-Aqsa mosque has also been targeted by the Israeli settlers and raids who tried to impede its renovation.

The worshippers were restricted to enter the Al-Aqsa mosque for a sustained period of time by the Israeli settlers and Israeli police.

Moreover, the interior part of Palestine was intruded on by the police to gain access to personal details and detained some of them at the gates.

Since 2003 the settlers took control of the Al-Aqsa mosque because the Israel army had been well aware of the ministry of Awqaf and Islamic Affairs rejection of the settlers who invaded the mosque.

Under international law, the settlements have been considered illegal by the international community. The view of the Israeli construction settlements leading towards violation of the Fourth Geneva Convention had been upheld by the United Nations several times.

Israel cited several reasons for retaining the west bank based on the notion of historical rights towards it as homeland; security grounds, internal and external, and the occupied area have deep symbolic value for Jews.