HomeStoriesHe wanted To Blow Up The Mosque, Then He Became A Muslim
2 minute read
No comments

Richard McKinney, former Marine sergeant might be retired but his hatred for Islam was getting worse. So, he decided that he is going to blow up the mosque, then he became a Muslim.

During his military tenure, Richard McKinney had become eager to kill human beings and used to get a tattoo after a confirmed kill. He further said that he has witnessed things he cannot even discuss with the people.

I didn’t hate Islam since the start, but later I have developed this hatred for Islam.

After Richard came back to the US, he was mentally upset and has turned into an alcoholic and later gained a hatred for Muslims and religion.

I thought by blowing up the mosque, I would be doing a great job.

Watch how this guy, who once hated Muslims and Islam and wanted to Bomb and Kill Muslims, became a Muslim

After so much hatred, Richard McKinney came in front of the Islamic Center, but not to bomb it, but to ask Muslims a few questions before he could take a stand against them. The management of Islamic Center gave him the English Translation of the Holy Quran, and ask him to come back after he finishes reading it.

After reading Quran, he started coming to the mosque to seek answers to his questions, he further said that he never feel unloved, or people in the mosque never ill-treated me despite I had so much hatred for them. He said Muslims were very friendly people he had ever met. He started spending hours in the mosque and after 8 weeks he decided to accept Islam.

If you have a similar story to share, or if you want to write an article on Islam or Muslims then do not forget to submit it to us at Write For Us tab. 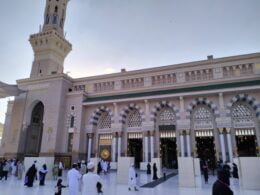