Bollywood actress who is now entering Hollywood, Priyanka Chopra, are attacked by many Twitter users after she spoke out in support of Iranian women who were protesting the death of Mahsa Amini.

Mahsa Amini was arrested on September 13 as she was leaving the Tehran metro station with her brother and other relatives. She was arrested for allegedly violating Iran’s strict rules for women to wear hijab and modest clothing.

Mahsa was in a coma for three days, then died “of natural causes”, as authorities claim, but according to activists, the cause of death was a fatal blow to the head. After the incident, thousands of Iranians have taken to the streets over the past two weeks to protest the tragic death of Mahsa Amini.

Women around the world have shown solidarity with the plight of Iranian women in rallies and demonstrations by cutting or shaving their hair in public or when video is made.

Like many other women, Priyanka Chopra has also been giving her support on social media over the weekend. By sharing an animation of a woman freeing herself from the watchful gaze of the Iranian government and standing together after the tragic death of Mahsa Amini, Priyanka took to her personal Instagram account to share her concerns.

The wife of singer Nick Jonas pointed to the courage of women in Iran and around the world who stood up and raised their voices in protest for Mahsa Amini. Priyanka also urged the authorities and people in power to listen to the protesters’ calls and understand their concerns.

After her post, Twitter users quicklly criticized and called Prinyanka out for her selective activism. One user said that Priyanka knows how to make money from someone misery. The user pointed to how the actress vocally supports women in Iran but is silent when a Dalit woman is raped, burned and beaten by family members in her home country India.

Another user highlighted Priyanka’s act of inviting PM Narendra Modi to her wedding reception when the BJP government carried out a brutal crackdown on Hijab in India but had the courage to support the anti-Hijab protests taking place in Iran.

Several other users shared that they regretted Priyanka Chopra’s actions as an Indian celebrity who prefers to look in another direction, which is talking about the Hijab issue that is happening in Iran rather than what is happening in her own country. Some of them even called the 40-year-old actress a hypocrite for it. 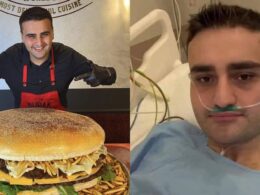