JEDDAH — The Ministry of Hajj and Umrah advised those who wish to perform Hajj from within and outside the Kingdom not to deal with any suspicious websites that pretend to help with registration for Hajj.

On Friday, the ministry announced that it would announce Hajj procedures for the 2022 season on its official website shortly.

Earlier this year, the ministry announced that it would raise the number of pilgrims from within and outside the Kingdom to one million this year, with a fixed quota for each country.

There was only 45.2 percent of foreign pilgrims permitted to enter this year, compared to the actual quota allocated for each country before the outbreak of the Coronavirus pandemic.

Foreign pilgrims this year are subject to a number of terms and conditions set by the Ministry of Hajj. Pilgrims above the age of 65 aren’t allowed to perform the pilgrimage, and they are required to receive two doses of the Coronavirus vaccine. 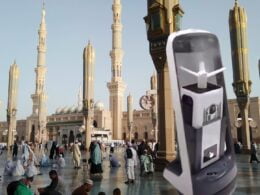