After Asr prayers on Tuesday, a man carrying a knife was arrested from the first floor of Masjid al-Haram after chanting terrorist slogans, Saudi Press Agency confirmed.

Makkah police spokes person said that man is arrested and the legal procedings will start against him.

There are no injuries reported.

Here is the video of the incident;

The General Presidency for the Affairs of the holy mosques, Dr. Sheikh Abdul Rehman Al Sudais said that the mosque is not for chanting racist extremist slogans, and is completely against Islam.

He further aded that the Masjid al Haram and Masjid an Nabawi are for the worshipping, Hajj, Umrah and Tawaf, not for chanting slogans. 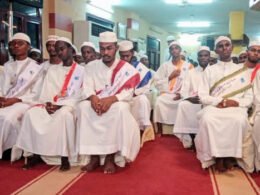