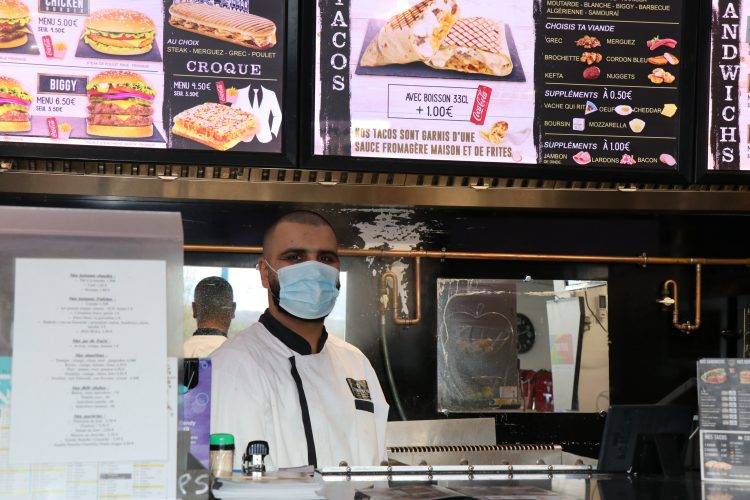 In Mantes-la-Jolie, Brahim Bourika, restaurateur of Moroccan origin, offers free meals to French students who are having difficulty eating, in particular, due to the consequences of the Covid-19 pandemic.

His decision is all the more remarkable when France is embroiled in a heated debate around the Separatism bill, currently under discussion in the National Assembly.

This bill, prepared by the Interior Minister, Gérald Darmanin, is qualified as discriminatory, particularly towards Muslims, whose places of worship, restaurants, associations, and other businesses are threatened by administrative pressure or even closures.

By his gesture, Brahim displays the profile of the exemplary Muslim.

The 28-year-old spoke at the microphone of the Anadolu Agency (AA).

He worked until 2017 in his father’s sandwich shop before setting up his own business four years ago.

“When I opened this restaurant, I promised Allah not to let anyone go hungry,” he said, insisting that his door is open to anyone who has no money.

Brahim chose as his principle of life one of the hadiths (words) of the Prophet Muhammad: “Show compassion towards men so that Allah does the same with you.”

“France is the 6th economic power in the world. How are these things possible in a country like this. These young students who work for France are condemned to starve to death. That’s not normal,” he also believes.

Brahim’s decision to offer students meals was quickly echoed on Twitter, then in local and finally national media. Many personalities and anonymous gave their support to the young restaurateur.

We do not see if the students are Muslims or Christians.

“In my eyes, everyone is equal, and I don’t see if the person is Muslim, or Christian, or black or Chinese or other. Our door remains open to everyone,” he explains.

Brahim does not expect any return, and he is content with the prayers that some may say for him.

“We are not enemies of France, the leaders should not see us like this”

The young restaurateur has also received many messages, even from other countries such as Belgium, Germany, Canada, and Morocco.

On the other hand, he refused any donation offer, not wanting his decision to lose all meaning.

However, he thanked each person, Muslim, Christian, or Jewish, who offered to give him money: “I am doing this for Allah,” he insisted.

“If you are a Muslim, Islam asks you to help people anyway. France is also our country. Muslims are not as portrayed on televisions,” he added.

He regrets, on the other hand, the debates around separatism, which mainly targets Muslims.

Brahim Bourika insists that young Muslims must be role models for society so that this message reaches the whole world.

To conclude, the young restaurateur indicates that only the mayor of his town called him to congratulate him. No government official approached him.