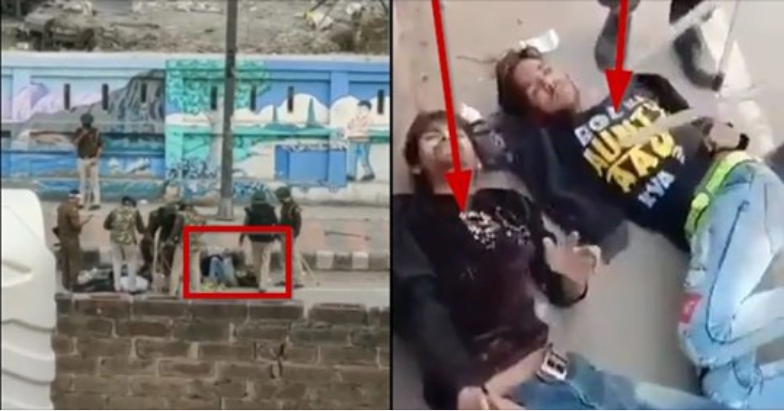 A video went viral on Social Media on 25th February 2020 (Tuesday) which showed Delhi Policemen beating five injured Muslim men and the other policeman was capturing the video as these Muslim boys were forced to sing Indian National anthem.

Among those five injured men, 24 years old Faizan has passed away after sustaining injuries from this event of forcing to sing Indian national anthem, The Indian Express reported.

24 years old, Faizan was a resident of Kardam Puri who lost the battle of his life at LNJP Hospital. Medical Director of LNJP hospital, Dr. Kishore Singh, while talking to The Indian Express told that Faizan was admitted to the neurosurgery ward on Tuesday at LNJP hospital and had died early Thursday morning. He further added that Faizan had suffered from gunshot wounds which were very critical.

He can be seen in the video in a blue shirt, who was lying near the pavement as mentioned by a Sreenivasan Jain, NDTV Journalist.

The elder brother of Faizan, Nayeem, who is currently working in a meat shop told News18 that before LNJP Hospital, Faizan was taken to GTB hospital, but they refused to take him in because of his Muslim name.

They were treating the patients only after hearing the name. Soon they were taken to Jyoti Nagar Police Station where they kept them for two days. Faizan was losing his life in the lock-up but the policemen didn’t let me see him. They threw us out of the police station and abused us. Nayeem, Faizan’s elder brother.

Tariq Ali, son of Kauser Ali can be seen in the viral video, was telling The Indian Express that he first saw the video on Facebook and shocked to see his own father in it. His father, Kauser Ali was on his way back to Kardam Puri, the place they reside from the India gate the same day.

Before that Alt News had varified the video by speaking to the victims seen in the video by keeping their identities safe. One of the victims said that Police had brutally abused them 5 to 6 Muslim men. Also told Alt News that Delhi Policemen broke someone’s leg and someone’s hand including my own hand and leg were also broken. The victim also had 8 to 10 stitches on his head.

Faizan’s brother, Nayeem also alleged that police knew Faizan was about to die but they still kept going on. He also told that Faizan was bleeding through his skull and his jaw was broken. He said Faizan murmured all night in pain before losing his life, he kept repeating “Police beat me up, They beat me up.”