The Imam of the Mecca Protected Mosque has experienced not the most pleasant moments in life by the efforts of a Muslim activist from Switzerland during the sheik’s visit to a European country.

Sheikh Abdur rahman al-Sudais also known as Sheikh Sudais, spoke in Geneva with a lecture on the joint “peacemaking” efforts of Saudi Arabia and the United States when he was asked very uncomfortable questions from the audience.

An advocate of Algerian origin and activist of the Islamic Center of Geneva, Yahlef Salyakheddin, publicly appealed to Sheikh Sudais, demanding from him an answer for the foreign policy of Saudi Arabia.

Watch the video yourself 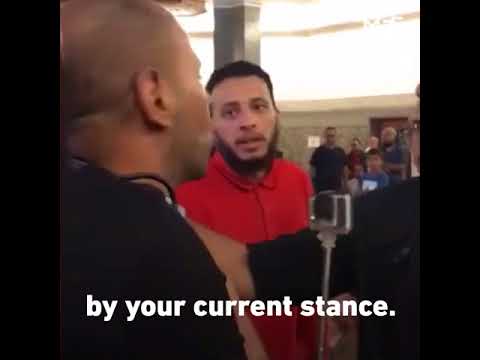 “How can you teach us about peace and security when our brothers in Yemen and Qatar are starving because of you? – loudly uttered a resident of Geneva, reports IslamNews referring to AlBawaba . “He comes to teach us the world, while he himself issues fatwas permitting the killing of our brothers in Yemen.”

Sam Sheikh As-Sudais refrained from answering suddenly sounded questions and tried to leave as soon as Salyakheddin was taken into the ring by his guards and supporters.