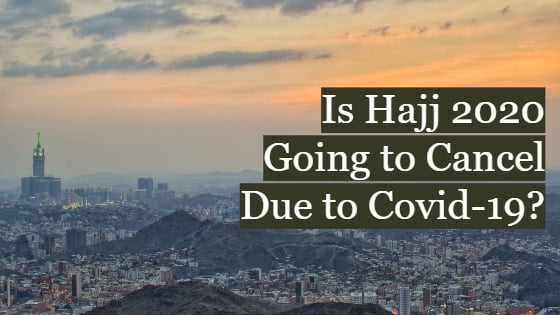 Muslims all around are shattered as Saudi Arabia might cancel Hajj 2020. According to the latest reports, the final decision will be out in a week.

This is right! Saudi Arabia is considering canceling Hajj 2020 because of the growing Coronavirus cases.

Within a week, the final decision will be made. It was told by the spokesperson of the Haj and Umrah Committee of Saudi Arabia that every Muslim should be ready to accept tough decisions.

This is also said that Saudi Arabia has been forced to cancel the Hajj this year after the cancellation of the Tokyo Olympic Games.

Is the empty place of Hajj one of the signs of Qayamat? It is what Islam has stated. COVID-19 has impacted a lot of aspects of daily life around the globe including traveling, trading, and other main economic aspects.

Thus, Hajj is known to stay abandoned throughout the year which is the largest religious gathering of the Muslims presents within Makkah.

Hajj preserves a significant place for Muslims as per Islam. It abandoning portrays bad omen for the Muslims. In Sahih Bukhari, as per narrated Shu’ba, it is stated that the hour i.e. that day of judgment won’t take place until the Ka’ba i.e. Hajj won’t get abandoned. Discussing in detail, the conclusion of the world would appear when Hajj would call off.

Therefore, if coronavirus impedes the main Hajj obligation, it would explain that the path of Judgement Day got initiated. The initial model of Kaaba, Allah Almighty’s House, is Baitul Ma’mur, which is located straightly above Kaaba.

We can also consider the expansion of Israel as another evidence in this century. Also, the appearance of Dajjal is also linked with the maximization of Israel, in accordance with the ancient scriptures. Muslims should focus on the factors from their side that what mistake was made due to which anti-Muslims are leading in terms of powers and causing the Muslim decay.

Are we, as Muslims, on the right path which was declared by Prophet (PBUH). No, we are failing. We are divided in various sects in the present era. Many of us focus on being materialistic rather than being spiritual.

Muslims got away from logic, rationality and every aspect which was bestowed upon us. Many of them are emphasizing on interest, adultery, and ignorance.

It is time that we should stay with unity and revise all the teachings by which we are blessed!