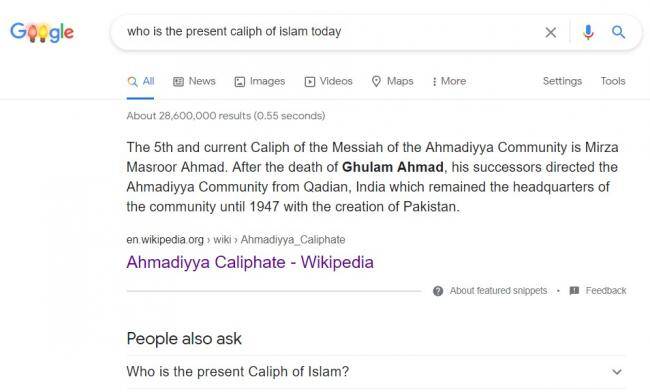 Muslims worldwide have complained to google about showing the Ahmaddiya leader as “Present Caliph of Islam.”

Ahmadis are not Muslims because of their views that do not come under Islamic jurisdictions. Ahamddiya is a separate religion but is clearly not Islam.

A few days back, when people from all around the world have been searching for “Present Caliph of Islam” it was showing up the picture of Mirza Masroor Ahmad, who is the current Ahmaddiya leader.

After taking notice of this, Muslims worldwide complained to Google and asked them to take this irrelevant information off from their search engine as it causes misleading of new Muslims all around the world.

The mainstream Muslim communities such as Shias and Sunnis do not recognize the Ahamddiya community as Muslims.