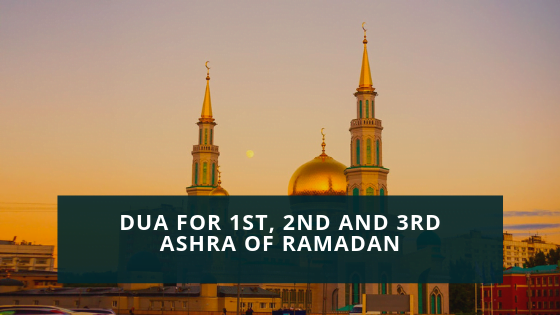 These are the three duas that you need to recite during each Ashra in Ramadan, First, Second and Third. These duas are must-read during Ramadan.

Ramadan holds the highest value among other Months in Islamic History. It is the month when the Quran was relieved to Prophet Muhammad PBUH, this month also consist Laila tul qadar nights, which holds greater rewards for worshipping which you can never find in any other nights throughout the year. Ramadan is an opportunity which Allah SWT gives to all Muslims to seek refuge, repent and ask for mercy.

In this part of Ramadan from 10th fast till 20th fast, we all should do Aastaghfaar which is to request Allah to forgive our sins. Say Astaghfar for the sins you have committed and promising yourself that you will never commit the same sin again.

Also be kind during your fast to other people and try to forgive little misunderstands between your family and relatives.

The ending of Ramadan contains the days of Lailat Tul Qadar, having the highest rewards among the rest of the days throughout the year. Alongside this, Muslims all around the world do I’tikaf in this Ashra and seek refuge by reciting the dua which we have given above.