Amid hijab row, a video of students offering Namaz at school emerges on social media.

A video of Indian-Muslim students performing Namaz inside a classroom at the Government Higher Primary School At Ankathadka in Kadaba Taluk of Dakshina Kannada, the Indian state of Karnataka, during a ban on religious activities at school, which also sparked the hijab controversy, has gone viral in social media.

It is known that the students studying in class V and VII had performed Namaz in the classroom on February 4. The 10-second viral video quickly sparked a reaction from local residents, who mostly opposed it.

Soon after receiving information, officials from the education department and Bellare quickly took action by visiting the school in question last Friday.

The headmistress Jalaja said the teachers were not aware of the incident. As soon as they found out, the teacher directed the students not to do any more religious activities in the classroom.

The parents of a few students have asked the school for permission to allow their children to visit the mosque for Friday prayers. However, the school authorities confirmed that no permission was given to offer Namaz in the school premises.

According to SDMC president Praveen Ankathadka, his party has asked parents to accompany their children to the mosque on Friday noon and later drop them back to school. The students had offered Namaz after locking the door. A parent meeting was held at the school at 10 am on February 12.

Earlier, protests against the hijab worn by Muslim students in educational institutions in Karnataka state had prompted the Ministry of Higher Education to impose a 3-day holiday starting February 9.

The protests began on February 4 at the Government PU college in the Udupi district of the states when some students wearing hijabs reported that they were not allowed to enter classrooms. 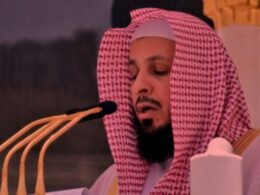