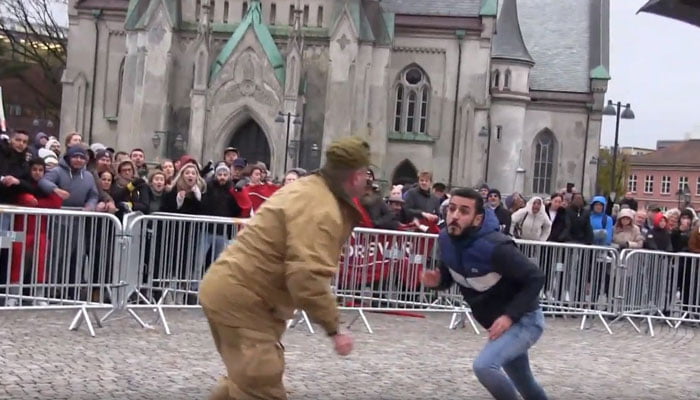 Social media can’t stop praising their “Muslim Hero” a guy who defended the Quran in Norway as an Anti-Islam rally took place to defame the Quran by burning it.

Lars Thorsen, Leader of SIAN (Stop Islamisation of Norway) rally tried to burn the Holy Quran in Kristiansand, Norway, even after Police warned him not to do such act.

In the video above, I can be easily seen the “Muslim Hero” jumping from all the hurdles to stop Lars from degrading the Holy Book like that, after this, the rally turned violent and Police arrest Lars Thorsen and his attackers into custody.

Social Media unveiled his name as Ilyas, although his full name is Omar Dabba Ilyas. he is a SAyrian national living in Norway and works at a Syrian restaurant in Norway that serves arabic food.

hashtags #ilyas_Hero_of_Muslim_Ummah, #Norway, #Defender_of_Quran, #TheGloriousQuran, and Muslims started trending all around to world to praise ilyas.

This act hurt millions of Muslims all around the world and those who are living in Norway.