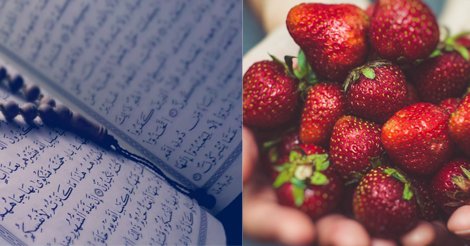 Fruits are essential things to make oneself Healthy. We, bring you the 6 fruits that were directed beneficial by the Quran and the Sunnah!

The holy Quran has taught us the way to live, and guidance for all the people on the earth. 1,400 years have passed, but still, people, including scientists can not deny the facts stated in the Quran. These are the facts that were spread forwarded by the last Prophet Muhammad (PBUH) to his followers. Scientists cite the Holy Quran as a reference in their researches as a piece of authentic evidence to claim their studies, and in various departments, the Holy Quran is being studied thoroughly to gain information out of it.

It is also known as the “Fruit of Desert”. Everyone knows the importance of dates for the health, as well as it is mentioned in Quran as;

As per a tradition, narrated by Abdullah bin Umar (RA), our Holy Prophet (PBUH) stated;

Also known as the seedless fruit. Almighty Allah swears on Figs and Olives in the Holy Quran;

A fruit of Jannah!

As per Muhammad Prophet (PBUH) states;

At some parts in the Quran, Grapes are mentioned side by side;

Also known as The Relish Fruit!

Hadiths and Quran directly state the importance of consumption of Olives. For its importance, the Quran states;

And this is what Hadith say about Olives;

This is called the Fruit of Blessings…

It is clearly stated in the Quran;

Islam has always suggested us to have a healthy diet. And the life of our beloved Muhammad Prophet (PBUH) has also taught us to eat the things which are good for one’s health. The fruits mentioned above also have the significance importance as per science too, but our Islam has proven it a long ago.