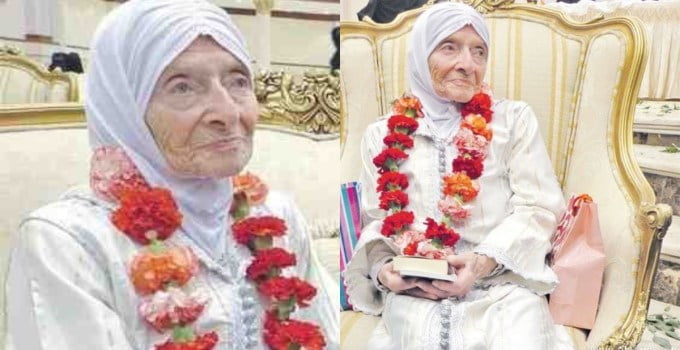 Georgette Lepaulle is the oldest woman, she is from Belgium and she is 92 years old. Last year she accepts Islam after being inspired by her Muslim neighbour.

Her neighbor Muhammad has been her neighbor for the last 50 years old. After passing of her family, She joined Muhammad’s wife and her family and started living with them. Muhammad and his wife have a son and two daughters who live with Georgette all her life.

Muhammad lost his mother but gladly found her new mother in the face of Georgette. Georgette says she pulled towards Islam, seeing them praying together inspired to me explore Islam. It was good to see how they talk to each other and care about each other. Georgette said she has her own daughter, who never calls her or sees her but this Muslim family takes care of her all the time.

Georgette visited Morroco with the family of Muhammad during the month of Ramadan. She saw many people fasting and caring for each other, She was shocked to realize that she found Islam so late in life but she is thankful that she found it in her lifetime.

She traveled back with Muhammad and family to the Brussels Mosque where she accepted Islam and changed her name to Noor Islam.

Georgette, now Noor Islam, set an example that it is never to late to come back to Islam and be a good Muslim.

8 Words That Are Mentioned 1,464 Times in The Holy Quran

Masha Allah may Allah bless her