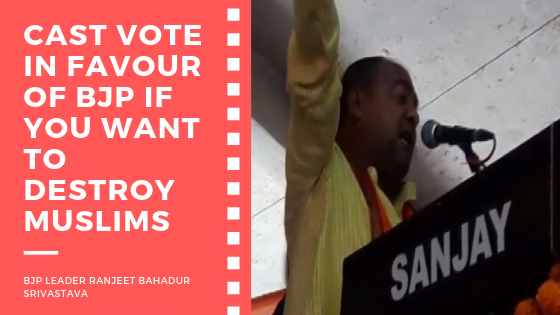 BJP Bhartiya Janata Party’s leader Ranjeet Bahadur Srivastava has told his audience that they should vote for BJP if they want to destroy Muslims, reported media.

BJP leader Ranjeet Bahadur Srivastava further said that after Lok Sabha elections, the Party (BJP) will bring special machines from China to shave at least 10 to 12 thousands of Muslims and then they will force them to convert to Hinduism. He insisted the people to cast their vote in favor of BJP in ongoing Lok Sabha election or else get ready to face the bitter results if they do not vote for BJP.

Previously another BJP leader had threatned to attack the Holy Kaaba and turn it into a temple, which created a huge uproar among the world Muslim community. Currently voting of the Lok Sabha elections are in secocnd phase in Uttar Preadesh which conluded at 5pm with a little turnout of 67.55 percent. Rest of the 64 seats will be in polls in next five phases of elections. The final counting of votes will take place on May 23.

These news are not new to the Muslim living in India as they continue to face bitter situations during the ongoing elections in India.

Let us know what you think about this in the comments below.