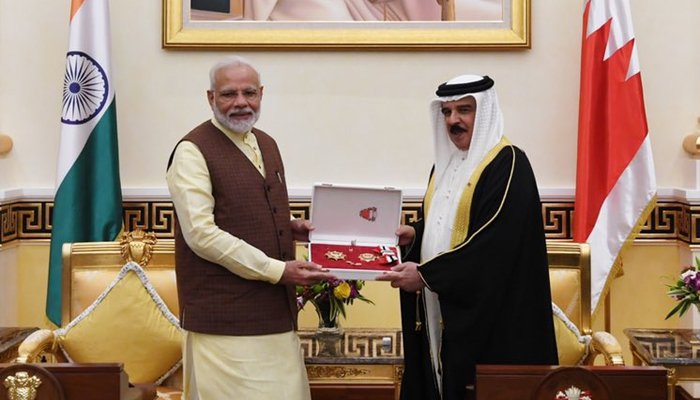 Prime Minister of India, Narendra Modi has been awarded the King Hamad Order of the Renaissance by King Hamad bin Isa bin Salman Al Khalifa to honor the efforts of Modi in bilateral relations.

Narendra Modi is the first-ever Indian prime minister to visit Bahrain and received the highest civilian award on Saturday night.

Narendra Modi arrived in the capital of Bahrain, Manama on Saturday after finished his UAE trip where UAE also gave him the highest civilian award.

During the speech, Bahrain King praised Narendra Modi for his effort. He said that he is happy with the role of India at an International level, to start strategic development on core issues.

Bahrain king has ensured that Bahrain and India will work together for the stability in the region. And will protect oil routes to ensure strength. India will also help Bahrain in space technology, energy, and Cybersecurity.

Currently, under Modi’s government, Muslims in Kashmir are brutally murdered and are being stripped of their rights. But still, Middle Eastern countries can not stop praising Modi despite his mass genocide of Muslim in Kashmir.